Hardness is a measure of the resistance of a material to plastic deformation induced by applied forces. Some materials (e.g. metals, ceramics) are harder than others (e.g. plastics, wood). Hardness is an important parameter correlating with wear resistance of the material. In applications where the wear has to be restricted, high hardness materials are typically used. See the description of the Vickers hardness test below.

The Vickers Hardness test (ISO 6507) is used to characterize hardness of various solid materials (metals, ceramics, etc.). A diamond pyramid is pressed against the solid with a certain normal load and the hardness is calculated based on the imprint left on the surface. Hardness may vary as a function of load, therefore, it is advised to specify applied when HV hardness is reported. A square-based pyramid indenter whose opposite sides meet at the apex at an angle of 136° is employed in Vickers hardness test. Imprint size is measured with the aid of optical microscope, see the figure below.

In contrast with Rockwell and Brinnell hardness techniques, the pyramid indenter is advantageous since the square imprints are easier to measure than the round impressions from spherical and conical indenters. Another advantage of the Vickers hardness test is absence of different scales, as compared to Rockwell and Brinnell tests. At low values (VH<~400HV), Vickers hardness was shown to be the same as Brinell hardness (see hardness conversion section).

Schematic representation of the Vickers test is shown in Figure 1. Further information regarding existing standards and procedures can be found in references [1,2].

where d is the average of the two diagonals of the imprint and F is the applied load. Hardness in GPa is calculated as follows:

The yield stress can be approximated from the hardness (given in HV) as follows:

A video of a hardness test procedure is shown below: 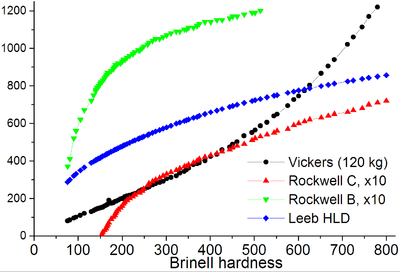