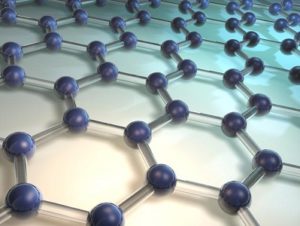 Graphene has unique properties and is being extensively used in various applications. It got a deserved attention in the field of tribology as well and was reported to lead to the states of superlubricity (see Macroscale superlubricity, Reduce the Friction with Graphene Balls, Superlubricity in graphene nanoribbon – gold interface).

An international team of researchers from China and United Kingdom has recently reported a use of graphite as an additive to a Esterified Bio-Oil. Friction and wear properties were reported to be enhanced noticeably. It was found, that the graphite particles undergo a friction induced transformation into a high-quality graphene layers. This process is a mechanical exfoliation of graphene from graphite due to shear. These graphene sheets further were adsorbed or reacted to the surfaces to create a so-called tribofilm. The tribofilm has a sacrificial nature and prevent the wear of the bare materials and decreased friction. It was clearly identified, that the transformation process is highly linked to the applied conditions, namely load and sliding speed. With the increase of the applied load, smaller graphene particles were obtained and created a thicker tribofilm. This leaded to the decrease of the wear and friction. With the increase of the sliding speed, in turn, the wear increased. Although the tribofilm was found to be thicker for the higher sliding speed, the quality of it was reported to be poorer and it was destroyed more easily.

The reported in situ generation of graphene may have great prospects in tribology to reduce friction. More details of the research can be found in the original article: “Friction-Induced Transformation from Graphite Dispersed in Esterified Bio-Oil to Graphene”, Y. Xu, J. Geng, X. Zheng, K.D.Dearn, X. Hu.

It is a common trope in disaster movies: an earthquake strikes, causing the ground to rip open and swallow people and cars whole. The gaping earth might make for cinematic drama, but earthquake scientists have […]

The requirement for greater energy efficiency in engineering systems has led to a general reduction in lubricant viscosity, which means that an increasing number of engineering components operate under boundary lubrication conditions. As a result, […]

Recently Boston Dynamics’ released a video of a robo-dog army pulling a truck down the road. The future is here. For now it looks like the good old Terminator I movie. But I guess we […]