Let’s start from the beginning: what is a seal?

A device or material that is used to close off or fasten an opening or connection, especially to prevent the escape of a liquid or gas.

In other words, a seal is a mechanical component used for keeping the fluid A and the fluid B apart.

Figure 1. A sealing component keeps fluid A and fluid B separated.

The sub consequent question is what makes fluid A want to mix with fluid B and vice versa, i.e. which are the transport mechanisms of these fluids? There are basically two: 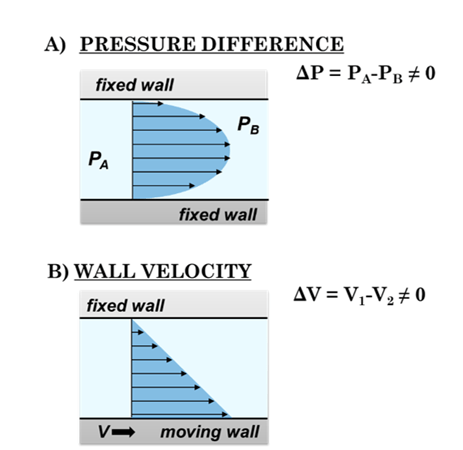 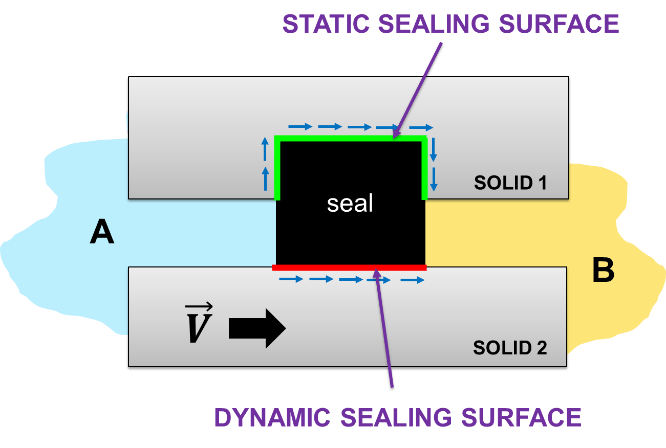 Dynamic seals can be further classified according to the characteristics of the moving components. Generally, these can be classified in two groups: Reciprocating and Rotary seals. 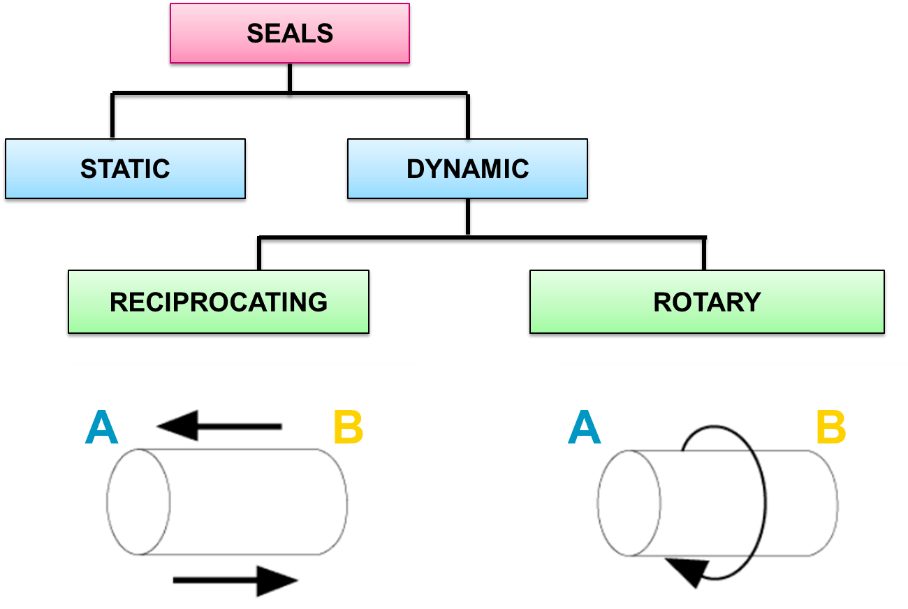 In fact, seals are everywhere. The following are few examples of static seals: 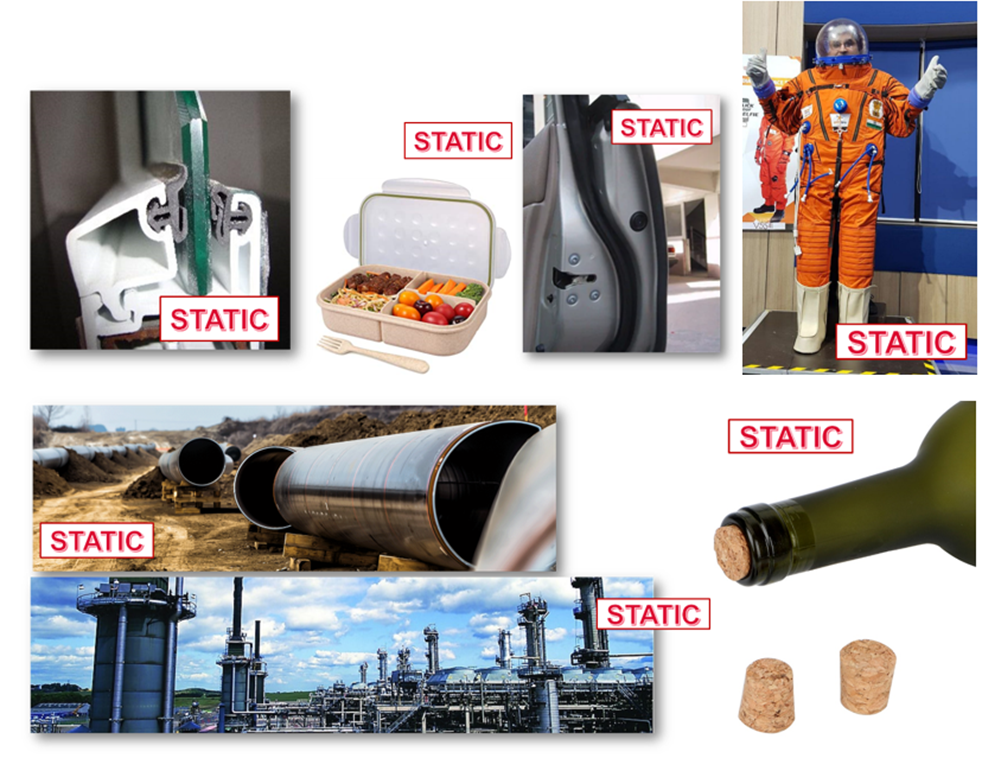 When it comes to dynamic seals, notice that the most part of them must prevent leakage also when the components are at rest, i.e. no relative motion between the components. The following images are just few examples: 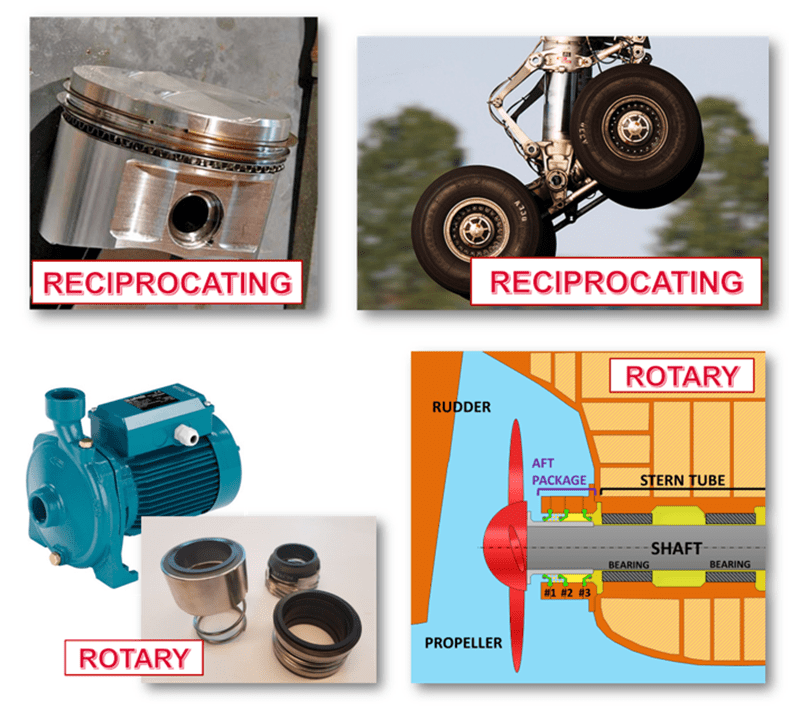 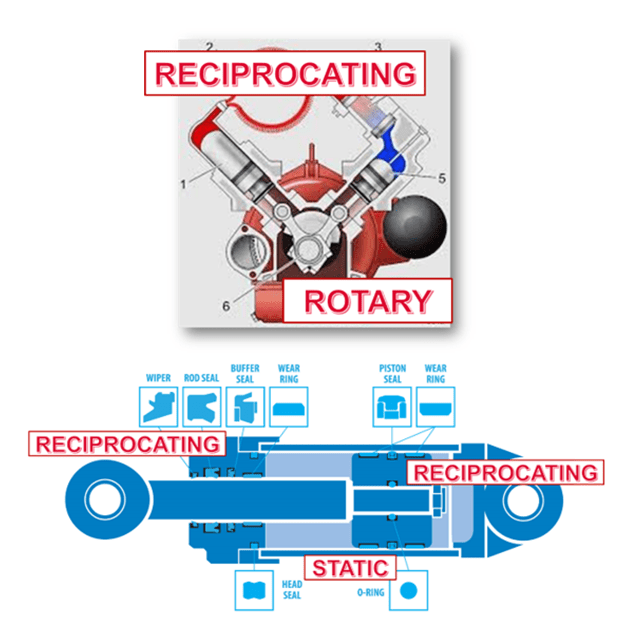 Several variables play a role when it comes to preventing fluid migration between two static surfaces, i.e. the percolation. To understand this phenomenon we need to focus on the microscopic scale. When two surfaces are loaded, the asperities on the surfaces deform leading to a specific real contact area (not apparent but real contact area). A tight sealing surface is achieved when all the microscopic sealing paths are shut. In other words, leakage is prevented when the real contact area spans from one side to the other generating an effective sealing barrier between A and B. Further insight on this phenomenon can be obtained by the use of Boundary Elements models.

Figure 7. Principle behind of static sealing.

Several variables take place when two surfaces are loaded against each other. The main ones are listed in Figure 7. By increasing the loading of the contact the real contact is extended. Furthermore, by having smoother surfaces, a lower deformation of the asperities is required and hence the contact becomes tight with a lower amount of loading. It is common to select a soft material for the seal that deforms over the asperities of harder counterpart. This way, the microscopic leakage paths can be easily closed. Due to that seals are usually made from material that can conform on the surfaces of the surrounding hardware. Hence, metal seals require from significantly higher load in order to provide a tight sealing surface. Additionally, the characteristics of the fluid being sealed also determines the ease of sealing it: hydrogen is harder to seal than engine oil.

Both reciprocating and rotary dynamic seals are still nowadays a hot topic in research. The author spent the last four years focusing on rotary lip seals and there are still many unkowns on the operation of these seals (see Figure 6). The topic of dynamic sealing will be approached in a separate post as it goes beyond the scope of this publication.

Hydrodynamics play a paramount role there. The geometry of the gap, the shaft stroke, the velocity and the fluid properties on each side determine the pressure build-up and hence to a flow rate in each direction of motion. Therefore, the flow rate during the instroke often differs from the flow rate during the instroke leading to an overall flowing direction. With the use of EHL simulations, these flowrates can be optimized to the specific application.

These two types of dynamic rotary seals have in common that they do no present an obvious lubrication mechanism. There is no apparent convergent profile on the direction of motion. Hence the source of hydrodynamic pressures relies on the deviation of nominal parallelism of the sealing surfaces, i.e. surface roughness and misalignments. Further information on the operating mechanisms of the radial and axial seals can be found here and here, respectively.

Finally, it is worth mentioning the non-contacting or clearance seals. The main characteristic of these seals is the lack of contact between the static and dynamic components, i.e. there is always a gap. In applications where a certain amount of leakage is acceptable, clearance seals becomes an interesting option as they virtually present a null wear rate. This kind of seals are found in both reciprocating and rotary applications.

This week the 20th edition of the biannual International Sealing Conference (ISC) took place in Stuttgart. Around 200 assistants showed up to the 2-days sealing conference. Well-known companies such as Bosch, SKF, Trelleborg, Parker, Shell, […]

A bit of context Let’s say you want to design a new car but that you are a new car manufacturer. You can’t really step back and look at your previous experiences, so everything […]

After the Mystery of Rotary Lip Seals

Lip seals compete with mechanical face seals in sealing oil or grease in rotary shaft applications. Under certain running conditions both kinds of seals can be used however, the latter ones are generally used for […]

We would like to show you notifications for the latest news and updates.
Dismiss
Allow Notifications
Skip to toolbar