Tribology is the science dealing with interactive surfaces in relative motion and includes the study of friction, wear, and lubrication and how these properties affect design. The term tribology was coined in 1966 by Peter Jost, the man considered the founder of tribology. Leonardo da Vinci is a famous Renaissance artist of world renown, known for paintings such as the Mona Lisa and The Last Supper. What could the two possibly have in common? It turns out that da Vinci conducted the first systematic study of friction and is also known as a First Tribologist. That early study is the foundation for today’s science known as tribology. 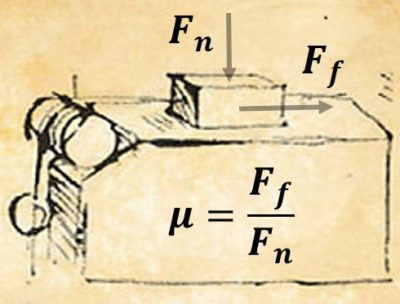 Leonardo da Vinci (1942 – 1519) spent more than 20 years studying friction in regards to various mechanical problems. He understood the importance friction played in how machines worked and how friction limited efficiency. Leonardo did not publish any of his findings; however, some of his notebook pages discovered more recently contain amazing illustrations and observations related to friction. His ideas included the thought that friction was the result of the roughness of the material and smoother materials resulted in less friction. Specifically, da Vinci noted that friction is not dependent of contact area, friction resistance is directly proportional to the applied load, and friction has a constant correlation of µ=0.25. Amazing thought and detail for a man living during the Renaissance period.

Leonardo da Vinci’s discoveries came about by conducting experiments using systems of strings, pulleys, and weights. From there he analyzed the behaviour of various simple machines including wheels and axles, screw threads and pulleys. These were all essential components of his drawings of more complex machinery. Leonardo never built any of his inventions; however, modern scientists have used his sketches to construct his ideas, resulting in a great deal of success. Leonardo was clearly a man ahead of his time.

Whether we realize it or not, friction is extremely important and affects almost all aspects of our lives. Friction is the force acting against the direction an object moves. It provides grip, slowing down or stopping objects and occurs when two or more objects move against each other. Without friction, driving a car and even picking up objects is impossible. In terms of technology, scientists and engineers spend a lot of time and effort working to reduce friction within machinery in order to increase efficiency.

Therefore, friction can be used for an advantage, but also may bring disadvantages. Advantages include being able to walk or drive without slipping or being able to put pen to paper and see your writing appear on the page. Friction is a necessity in everyday life. However, friction also creates many problems. Some issues are minor such as the blisters on your feet caused by the friction occurring between your heel and the back of your shoe as they rub together to items such as clothing and tires wearing out more quickly as they are exposed to other surfaces in the washing machine or on the road. However, friction also creates greater damage as friction leads to wasted energy, which increases the required energy consumption, which then ultimately results in increased greenhouse gas emissions. Today, scientists put a lot of focus on the study of friction in order to create a cleaner and safer planet for future generations. There is no possible way Leonardo da Vinci could ever envision the impact his studies would have on the future of the planet Earth.

Who is The First? Leonardo da Vinci!

With the last years’ rise of electric vehicles (EV), you may have thought that the future lubrication challenges for cars may not be challenging anymore. At least not as challenging as the ones that the […]