A real life examples to help explain the importance of tribology are priceless. Car races can provide an exciting example. A pile up at the 2019 Daytona NASCAR car race created an example the effect of friction in our life.

On lap 190, with only nine laps to go, the car of Paul Menard tapped Matt DiBenedetto’s car, causing him to lose control and spin across the track. The result was a massive crash involving a total of 21 cars. The results are spectacular to watch, especially considering that all drivers safely got out of their cars. Given the spectacle of the crash and the lack of serious injuries, it provides a perfect opportunity for a tribology lesson, a lesson relating frictional forces, velocity, and acceleration. 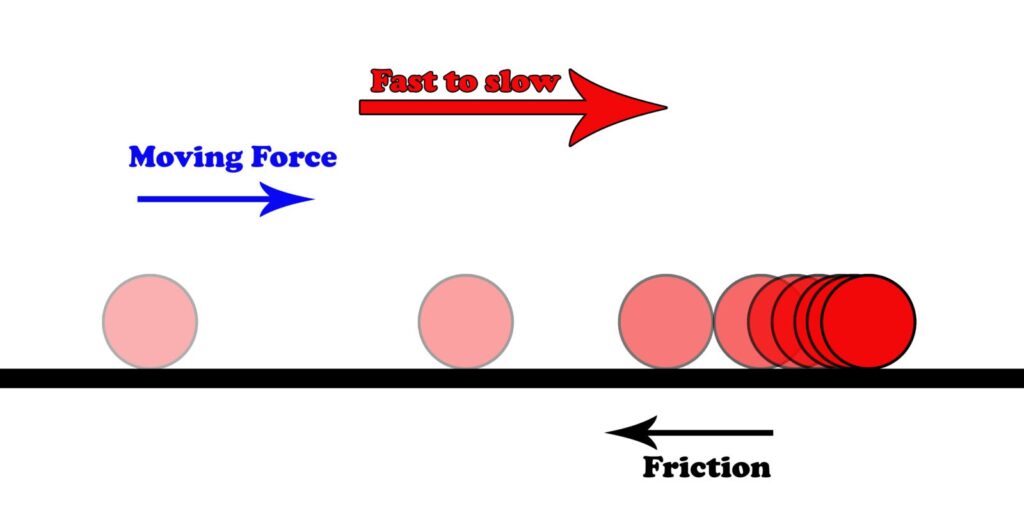 The strength (or magnitude) of the frictional force depends on the normal force (how hard the car is pushed down against the racetrack) and the types of materials pushing against each other. This strength is called the coefficient of friction. To find this it is necessary first to determine the acceleration of the car.

One way to find the acceleration is to use the formula:

are the final and initial velocities,

is the acceleration and

is the distance traveled to the stop. The final velocity is zero and the initial velocity and time it took the car to come to a complete stop can be estimated from the video and Google. Rhett Allain made the necessary estimations for us (see the reference), so that we just take his values for a distance – 468 meters and initial speed – 84 meters per second. This gives an acceleration of -7.53 m/s2 .

Using the calculated acceleration, it is possible to find the coefficient of friction (or the strength of the friction) using following equations:

This gives a coefficient of kinetic friction at 0.769. While there are other forces at work in the process, this approach provides a good first approximation for the friction coefficient. Pretty close to the values given in the source.

The article is based on a story by Rhett Allain: “Estimate the Friction Coefficient in That Massive NASCAR Pile-Up” (www.wired.com/story/estimate-the-friction-force-in-that-massive-nascar-pile-up).

How do phonons lead to frictional energy dissipation?

Friction is often associated with the generation of vibrations in the solids that are sliding over each other. Mathematically, these vibrations are described by the phonons in the two solids, the vibrational eigenmodes. Here, we […]

Recently Boston Dynamics’ released a video of a robo-dog army pulling a truck down the road. The future is here. For now it looks like the good old Terminator I movie. But I guess we […]

Research sheds light on friction, lubrication and wear in cartilage 11:25 a.m., Aug. 24, 2015–Osteoarthritis, which affects some 27 million people in the U.S. alone, occurs when the protective cartilage on the ends of bones […]