Lubrication between two surfaces depends on their respective co-efficient of frictions, surface finishes and also the type of lubricant used, if there is any. It is known that the temperature at which these surfaces  are placed will also play a crucial role in such cases. This is put to test by a group of researchers by applying a coating produced by burnishing powders of antimony trioxide and magnesium silicate hydroxide with carbon (MSH/C) on nickel super alloy substrate at an open-air experimental setup. During this process there is a gradual decrease in the coefficient of friction. With the increase of temperature, at 300°C the coefficient of friction reduces to 0.008 achieving superlubricity. This experiment confirmed the design of new MSH/C-based coating using burnishing process. Though the frictional value is relatively high at room temperatures, the surfaces exhibited excellent tribological behavior at higher temperatures.

In this experiment two types of powders are used for coatings. Namely, MSH/C and antimony oxide which are produced by burnishing process. This process uses a room temperature mechanical device which uses balls or rollers to press lubricant powders and coat the necessary surfaces on the specimens. A friction test with pin on disk tribometer is performed to understand the surface behaviors. The width and wear scars and marks were observed on the specimen using Zeiss optical microscope after conducting the experiment. During the initial stage of the experiment the coefficient of friction started to increase until the temperature reaches 200 °C. From which the coefficient of friction drop is rapid. To understand the root cause of this behavior the wear tracks are analyzed. It is clear that there are very mild wear tracks at high temperatures when compared to lower temperature results which have significant wears. It is also observed that when this experiment is performed at room temperature the coating is completely removed from the ball leaving a blackish layer. Upon further inspection these are found to be different compounds of oxides. Contradicting these results, when the experiment was performed at 300 °C the applied layer is still intact. This proves that with the increase of temperature the presence of oxides on the layer will substantially decrease. 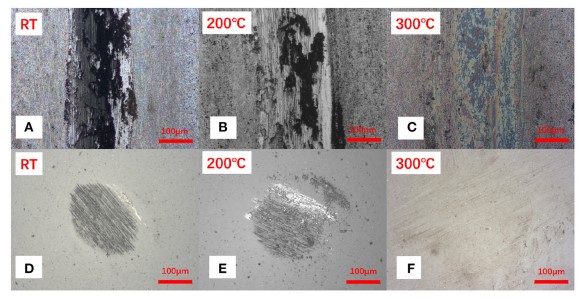 Additionally, the Raman effect is used to understand the intensity of different oxide layers formed. It is observed that no carbon or MSH related Raman peaks are present at the worn out surfaces. This study helps support the statement that superlubric nature of coating is a synergistic effect of the adhesion layer and triochemically generated surface carbon film. 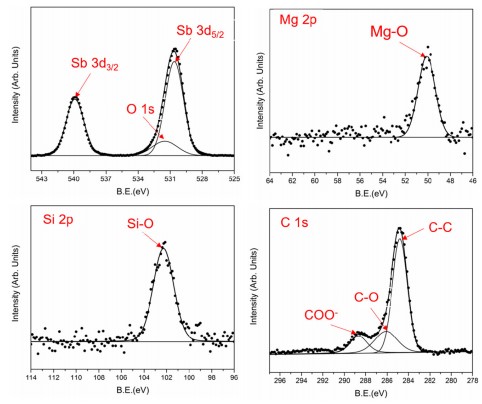 In conclusion, this research conducted by the collaboration of researchers from China and the USA was able to design a new MSH/C-based coating using burnishing process. This experimentation helped to find new insights in high temperature lubrication systems. That helps in creating easily self-repairable surfaces by tweaking the operational temperatures.