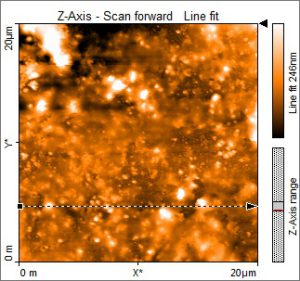 Tiny particles are all over around us and sometimes they may create problems. This is especially of concern with metal particles formed due to wear in man-made engineering devices. Particles formed in car disk brakes may harm lung cells, metal particulate limits the service life of artificial hip implants and other engineering machines. They even may lead to a catastrophic failure. Severity of the impact is often related to the size of these tiny particles, which in many cases is in the range of 1 hundred nanometer – approximately 1000 times smaller than the diameter of the human hair. The small size also brings the complexity in the analysis of these particles.

Our research group in University of Twente recently had studied the metal (steel and brass) particles formed in lubricated contact pairs. These particles, once formed, start to decrease the lubricating properties of the oil or grease and may significantly decrease the lifetime of the component. In a set of experiments, tiny wear particles were collected using specifically designed experimental procedure and analyzed to obtain the size as a function of the applied conditions. By using Dynamic Light Scattering technique and Atomic Force Microscopy, the size of the particles was assessed. It was found, that it was in the range of 200 nm and slightly varied with the applied load, but not temperature. The amount of particles formed was found to be terrific: the number of particles formed during 1 meter of sliding with 1 N load reached 2 million! How many of those are generated during a typical car break? No wonder the huge amount of these particles can create big problems.

With this measurement data in hand, it is possible to build and validate wear models to predict the size of the wear particles. This in turn can help researchers to create a better component design and control the negative effects coming from these tiny debris.

The details of the research can be found in the original article: “Analysis of Wear Particles Formed in Boundary-Lubricated Sliding Contacts“, A. Akchurin, R. Bosman, P.M. Lugt.

A one million dollar question for a tribologist is as follows: where does the friction come from? Despite the undeniable progress in tribology in recent years, this question remains there. But there is a light […]

Hysteresis in Friction of Graphene

Friction is a result of complex interaction of physical, chemical and mechanical forces at the sliding interface. Due to mentioned complexity, truly predictive models of friction are yet to be developed. As a result of […]

Graphene is a unique material in many aspects and has recently been applied in various ways. In tribology, it has been shown to lead to a superlubricity – an ultra low friction state. In laboratory […]