Sliding on flexible graphene surfaces has been uncharted territory until now,

Graphene, a two-dimensional form of carbon sheets just one atom thick, has been the subject of widespread research, in large part because of its unique combination of strength, electrical conductivity, and chemical stability. But despite many years of study, some of graphene’s fundamental properties are still not well-understood, including the way it behaves when something slides along its surface.

Now, using powerful computer simulations, researchers at MIT and elsewhere have made significant strides in understanding that process, including why the friction varies as the object sliding on it moves forward, instead of remaining constant as it does with most other known materials. 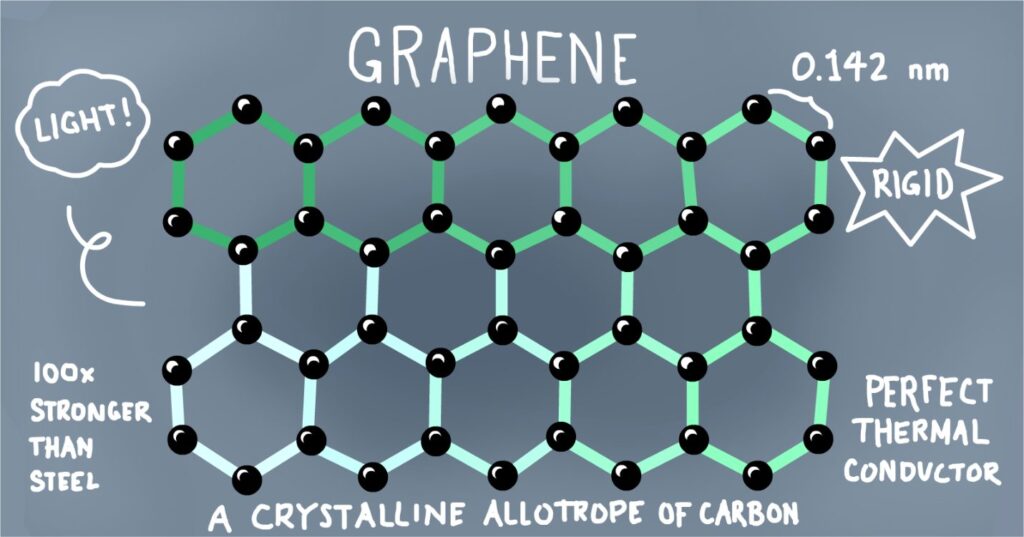 Graphite, a bulk material composed of many layers of graphene, is a well-known solid lubricant. (In other words, like oil, it can be added in between contacting materials to reduce friction.) Recent research suggests that even one or a few layers of graphene can also provide effective lubrication. This may be used in small-scale thermal and electrical contacts and other nanoscale devices. In such cases, an understanding of the friction between two pieces of graphene, or between graphene and another material, is important for maintaining a good electrical, thermal, and mechanical connection. Researchers had previously found that while one layer of graphene on a surface reduces friction, having a few more was even better. However, the reason for this was not well-explained before, Li says.

“There is this broad notion in tribology that friction depends on the true contact area,” Li says — that is, the area where two materials are really in contact, down to the atomic level. The “true” contact area is often substantially smaller than it would otherwise appear to be if observed at larger size scales. Determining the true contact area is important for understanding not only the degree of friction between the pieces, but also other characteristics such as the electrical conduction or heat transfer.

For example, explains co-author Robert Carpick of the University of Pennsylvania, “When two parts in a machine make contact, like two teeth of steel gears, the actual amount of steel in contact is much smaller than it appears, because the gear teeth are rough, and contact only occurs at the topmost protruding points on the surfaces. If the surfaces were polished to be flatter so that twice as much area was in contact, the friction would then be twice as high. In other words, the friction force doubles if the true area of direct contact doubles.”

But it turns out that the situation is even more complex than scientists had thought. Li and his colleagues found that there are also other aspects of the contact that influence how friction force gets transferred across it. “We call this the quality of contact, as opposed to the quantity of contact measured by the ‘true contact’ area,” Li explains.

Experimental observations had shown that when a nanoscale object slides along a single layer of graphene, the friction force actually increases at first, before eventually leveling off. This effect lessens and the leveled-off friction force decreases when sliding on more and more graphene sheets. This phenomenon was also seen in other layered materials including molybdenum disulfide. Previous attempts to explain this variation in friction, not seen in anything other than these two-dimensional materials, had fallen short. 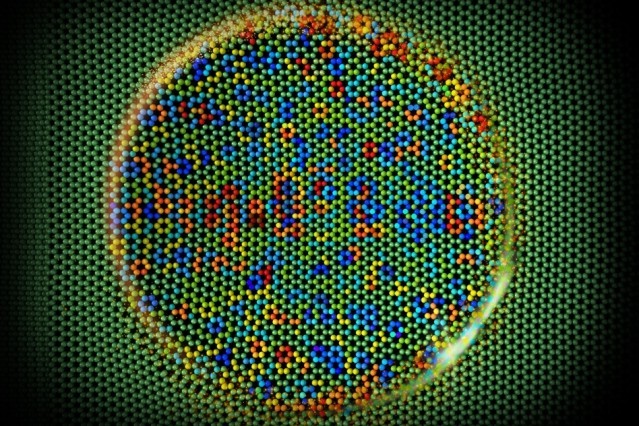 Images produced from computer simulations show the response of a graphene surface as a silicon tip slides over it. Relative forces of atomic friction on the surface are shown by colors: Red points are “pushing” sites that help propel the tip along the surface, while blue points are “pinning” sites of greater friction that inhibit the tip’s motion.

To determine the quality of contact, it is necessary to know the exact position of each atom on each of the two surfaces. The quality of contact depends on how well-aligned the atomic configurations are in the two surfaces in contact, and on the synchrony of these alignments. According to the computer simulations, these factors turned out to be more important than the traditional measure in explaining the materials’ frictional behavior, according to Li.

“You cannot explain the increase in friction” as the material begins to slide “by just the contact area,” Li says. “Most of the change in friction is actually due to change in the quality of contact, not the true contact area.” The researchers found that the act of sliding causes graphene atoms to make better contact with the object sliding along it; this increase in the quality of contact leads to the increase in friction as sliding proceeds and eventually levels off. The effect is strong for a single layer of graphene because the graphene is so flexible that the atoms can move to locations of better contact with the tip.

A number of factors can affect the quality of contact, including rigidity of the surfaces, slight curvatures, and gas molecules that get in between the two solid layers, Li says. But by understanding the way the process works, engineers can now take specific steps to alter that frictional behavior to match a particular intended use of the material. For example, “prewrinkling” of the graphene material can give it more flexibility and improve the quality of contact. “We can use that to vary the friction by a factor of three, while the true contact area barely changes,” he says.

“In other words, it’s not just the material itself” that determines how it slides, but also its boundary condition — including whether it is loose and wrinkled or flat and stretched tight, he says. And these principles apply not just to graphene but also to other two-dimensional materials, such as molybdenum disulfide, boron nitride, or other single-atom or single-molecule-thick materials.

“Potentially, a moving mechanical contact could be used as a way to make very good power switches in small electronic devices,” Li says. But that is still some ways off; while graphene is a promising material being widely studied, “we’re still waiting to see graphene electronics and 2-D electronics take off. It’s an emerging field.”

“Researchers have studied the unique frictional behavior of graphene for many years, but the complex mechanisms underlying these observations are still not fully understood,” says Ashlie Martini, an associate professor of engineering at the University of California at Merced, who was not involved in this work. “This paper tackles the challenge head on and provides new insights into the origins of friction on graphene that I anticipate will be applicable to two-dimensional materials in general.”

Martini adds: “The authors of the paper correctly suggest that their work could be used as a foundation for ‘tuning’ friction on graphene. Actually implementing this tuning has the potential for significant impact, and an exciting next step based on this research would be to implement the proposed tuning as a first step toward controllable friction in scientific and engineering applications.”

The work was supported by the National Science Foundation.

NASCAR Pile Up and Importance of Friction

A real life examples to help explain the importance of tribology are priceless. Car races can provide an exciting example. A pile up at the 2019 Daytona NASCAR car race created an example the effect […]

Illusion of static friction: Does it really exist?

Static friction might be an illusion made by the rotation of kinetic friction, even though, since the time of Charles-Augustin de Coulomb (1736–1806), we have believed that there exist two types of solid friction. Nakano […]