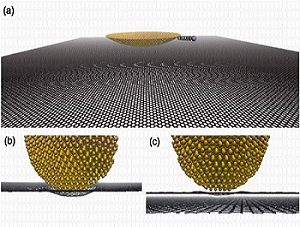 When the bodies slide against each other, the classic Amonton’s law states that the friction force is directly proportional to the applied normal load. This law holds true for various if not most of the engineering materials, like metals, ceramics etc. At the same time, the law is in agreement with the experiments across all the length scales (although at nanoscale the nonlinear behavior maybe observed).

Two-dimensional carbon based material, known as graphene, is unique in many senses and particularly may exhibit a negative normal load – friction force dependence, e.g., its friction decreases with the increase of the applied normal load. This behavior was observed experimentally, however, the exact mechanism responsible for such a peculiar behavior was not understood. To add more, this behavior was observed only for suspended graphene (a sheet deposited on a substrate with holes for example), and not for the supported (deposited on a substrate).

Recently, for the first time researchers from the University of California Merced could reproduce the peculiar behavior of the friction force – normal load behavior of the suspended graphene using molecular dynamic simulations. They found that the area of contact increased with the increase of load for both, suspended and supported graphene. The increase in the area of contact typically leads to an increase in friction force. However, in case of the suspended material, this was not the case.

Instead, the out-of-plane deformation of the graphene sheet, forming a puckered region in front of the sliding tip, called wrinkle, was found to be well correlated with the negative load behavior. The wrinkle first increased with the applied load, the same way as the friction force, but with further increase of the load, it started to decrease. It was therefore concluded, that in case of supported graphene, the area of contact dominates the friction, whereas in the suspended material, its the wrinkle height responsible for the friction.

The details of the simulations can be found in the original paper: “Atomistic Simulation of the Load Dependence of Nanoscale Friction on Suspended and Supported Graphene” Langmuir, DOI: 10.1021/la503329u.

Credit for image: Zhijiang Ye and Ashlie Martini, “Atomistic Simulation of the Load Dependence of Nanoscale Friction on Suspended and Supported Graphene”.