What is Boundary Lubrication?

Boundary lubrication describes situations where the applied load is primarily supported by contacting solid asperities, rather than a liquid lubricant. The boundary lubrication regime acts when the lambda ratio (the ratio of the lubricant film thickness to the composite surface roughness) is less than unity [1]. This is more prevalent for components with rough surfaces, operating at high pressure and low sliding velocity.
Over the last few decades, the main strategy from lubricant formulators to improve the energy efficiency of internal combustion engines has been to lower lubricant viscosity to reduce hydrodynamic friction losses. However, this means that more components operate for significant periods of time in the boundary lubrication regime. This means that controlling friction and wear in the boundary regime is becoming increasingly important [1]. Two main strategies exist to reducing boundary friction and wear; lubricant additives and surface coatings. Spikes has provided detailed reviews of the main lubricant additives used to control boundary friction [2] and wear [3], while Erdemir has reviewed the main types of surface coatings [4]. Synergistic combinations of specific types of additives and coatings which give very low friction and wear have also been identified [5].

The term ‘boundary lubrication’ was coined by Hardy and Doubleday in 1922 [6]. They studied the friction of surfactant molecules, which contain polar headgroups and nonpolar tailgroups, on glass and steel surfaces. They showed that fatty acids and fatty alcohols produced a progressively lower friction on glass and steel surfaces as their chain length was increased. They proposed that friction reduction was produced by the adsorption of vertically oriented, single monolayers of these surfactants on each surface, which separated the rubbing surfaces [2]. This view of boundary lubrication, shown in Figure 1, has become known as the Hardy model. This model remains the most widely accepted view of the friction reduction mechanism of organic friction modifier (OFM) additives dissolved in hydrocarbon solvents lubricating steel surfaces. 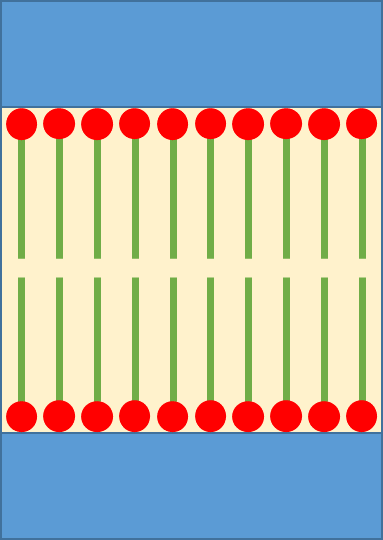 In 1940, Bowden and Leben [7] showed that single monolayers formed on steel surfaces using the Langmuir-Blodgett (L-B) method [8] initially gave very similar friction coefficients to fatty acids dissolved in hydrocarbon solvents. However, the low friction of the L-B film was only maintained for 2-3 passes and only became more durable when multilayers, rather than monolayers, were deposited on the surfaces [7]. This indicated the importance of there being a supply of fatty acid molecules to repair the monolayer which was damaged during rubbing [2].

Although fatty acids have been used in the majority of published research on OFMs, they are no longer employed commercially due to their acidic nature. This can corrode surfaces and neutralise overbased detergents. Therefore, fatty alcohols, amines, amides, and esters, with tails of between 12-20 carbon atoms, are now usually employed [2].

In addition to OFMs, many other types of additive have been developed to reduce friction and wear in the boundary lubrication regime. For example, zinc dialkyldithophosphate (ZDDP) is the principal antiwear additive in engine lubricants [3]. ZDDP adsorbs on steel surfaces and decomposes to form relatively thick protective tribofilms. The film close to the steel substrate consists mostly of iron sulphide while the outer region is mostly zinc/iron phosphate [3].