Since the early 1970s, the usage of Environmentally Acceptable Lubricants (EALs) in the industry started to grow and different sectors started investing in the development of EALs, e.g. development of EAL hydraulic ﬂuids for forestry operations in Germany in 1980s [1]. Reduction of oil reserves, increasing oil prices and environmental considerations to avoid the negative effect of oil spillage have attracted attention to new and less environmentally harmful lubricants [2].

Depending on the quality and regulations, different terms are used for naming these lubricants:

Environmentally acceptable/adapted lubricant (EAL) is the most sensible name. The reason is that the presence of non-water miscible oily substances leads to staining in the soil, fur or feathers, as well as the formation of oil sticks on water in case of oils with a density of lower than 1. So, it is hard to imagine that there is no or very low environmentally negative effects for calling an oil friendly or compatible [1].

Every year, more than 10 million tons of mineral lubricants and hydraulic fluids end up polluting the environment [3]. In the case of Europe, different industries consume around 5 million tonnes of lubricant of which 40 % ends up polluting the environment [4]. Attention is growing toward increasing the friendliness, reliability, compatibility, durability and efficiency of EALs to be compatible with different applications and industries like automotive and machinery industry. There are studies showing that EALs can provide even better lubricity and replace mineral lubricants in engines, generators, pumps, gears, hydraulic and metal working oils [2,5].

In order to consider a lubricant as environmentally acceptable, it requires to pass regulations in the following properties [1,6]:

Renewability refers to the amount of the material which can be replaced by reusing, recycling or natural processes like re-growing [1]. According to ASTM D-6866, there must be at least 25% renewable content in the oil to be accepted as biolubricant [4]. For a lubricant to have an EU eco label, the percentage of carbon content originated from the renewable source must be as follow [7]:

In recent years, minimizing the toxicity to prevent environmental impact has been considered as high importance in the formulation of lubricant [8]. The age of a lubricant, the base oil and additive can affect the toxicological properties of the lubricants, and final toxicity is close to the summation of the components toxicities [6].

In European-wide Standardized Minimum Requirements for “Biolubricants”, according to CLP- Directive 1272/2008/EC, the label of a lubricant should not be “dangerous to the environment”. In order to prove it, the fully formulated product is tested according to OECD 201/202/203: EC50/LC50/ IC50>100mgl-1 [4].

Bioaccumulation is the gradual build-up of lipophilic toxic substances in living organisms [1]. Biomagnification is the increase of the amount of accumulated substance each time it moves up a food chain. A biomagnificative substance must be long-lived, mobile, soluble in fatty tissue and biologically active [6].

The base ﬂuids which have required properties of being environmentally acceptable are selected from low molecular weight Polyalphaolefin (PAO), Polyalkylene glycol (PAGs), Synthetic Esters (SEs) and Vegetable Oils (VOs). However, ester-based oils are the most common environmentally accepted lubricant available in the market [4,9], thanks to their high-quality tailor made properties, non-toxicity and superior biodegradation [10]. Ester’s tribological performance is comparable to mineral oils [5] and can be blended with mineral oils. Another positive point about esters is the possibility of implementing the additive technology developed for the mineral oils [11].

Synthetic Esters are the most common EAL in the market. The Ester linkage considered as is produced from the reaction of acids (R-COOH) or their derivatives with the alcohols (R-CH2OH). The organic groups R′ comes from the alcohol and R from the acid used. Comparing to the mineral oils, the ester linkage is more stable at high temperatures, giving better oxidation resistance properties. Higher viscosity index, lower pour point, lower volatility, higher flash temperature and thermal stability, and low friction coefficient are the other properties making ester interesting choices [4,12,13]. The main advantage of ester oils is their environmental response regarding biodegradability and toxicity making them the most common oil used in environmentally accepted lubricants [6]. However, one problem with them is the unwanted hydrolysis [14]. Figure 2 shows the inﬂuence of the chain variations on ester viscosity, viscosity index, and pour point [13]: 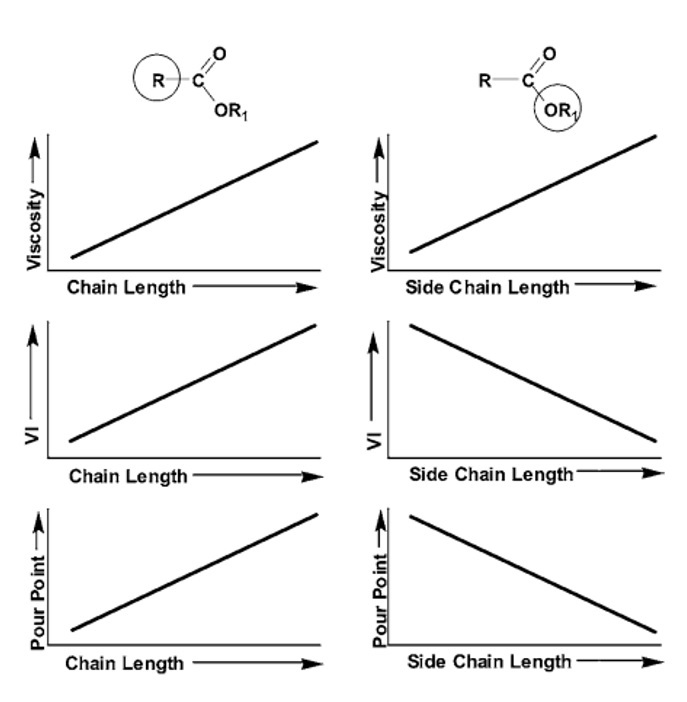 Figure : The effect of chains length on the lubrication properties of the ester oils [13]

The higher polarity of esters causes lower friction and wear protection without additives; however, this leads to a competition between additives and the ester molecules for being absorbed to the surface. This disadvantage, together with the unwanted hydrolysis can be enhanced by the proper selection of high-grade saturated esters and additives [11]. Esters can be mixed with the mineral oils, or with the PAOs. The mixture with PAOs is quite common in the applications where the seal swell in important. Their mixture keeps a balance between PAOs elastomer shrinking properties and the esters swelling characteristics [15]. In ecologically sensitive areas such as the water industry or wind energy, esters are always used in the gear systems due to their high biodegradability and non-toxicity [11].

Thermal and oxidative stresses can lead to lubricant decomposition and loss of tribological performance. Bartels and Bock refer to the recommendation by Flender, a German leading manufacturer of the industrial gearbox, which suggests that the temperature range suitable for mineral-based industrial gear oil is between -10 oC to 90 oC with short periods of 100 oC, while for the Ester based oil of the same category, it is between -15 oC to 90 oC. Also, 10000 hours is the lifetime at the average oil temperature of 80 oC. Sundarajan compares ester-based gear oil and a mineral-based one regarding the friction and wear response at different temperatures under reciprocating sliding motion [16]. It is observed that at a temperature lower than 75 oC, they have similar and mentions that the ester-based lubricant show friction instability at temperatures higher than 75 oC which leads to higher wear and irreversible changes in the lubricant [11].

The lower friction coefficient of Ester based lubricants in full film and EHL regime is observed in several studies [17–19]. However, José A. Brandão et al. check the stribeck curves of some mineral and ester-based lubricants and illustrates that while the friction coefficient of ester lubricants is lower at full film regime, it is higher under mixed and boundary lubrication. José A. Brandão et al. suggest that this effect is due to the different additives used in the lubricant formulation. Due to toxicity and biodegradability constrains this assumption can be true, however, it requires further investigation to find out whether it is a result of the base oil or the additives, or both [20]. The same result is found by Rieglert and Kassfeldt testing the environmentally acceptable hydraulic fluids [21]. It is found that these oils cause a higher wear rate compared to the mineral oils, though having a lower friction coefficient. The higher wear can be the result of poor surface covering of the anti-wear and extreme pressure additives due to a competition with the polar molecules of the environmentally acceptable to occupy the surface [21]. However, careful formulation of the base oil and additive can make the fully formulated ester-based lubricants comparable to the mineral oils, even in the boundary lubrication and wear performance. It is possible that two ester-based EALs have very similar physical properties, but different tribological properties.

Compared to a mineral oil with a certain viscosity, ester oils have a lower pressure-viscosity coefficient that according to EHL theory leads to lower film thickness [22]. Also, ester-based lubricants show higher thermal conductivity and heat capacity. The high viscosity index of esters excludes the usage of VI improvers. These parameters are beneficial in film formation especially under high slip and high load conditions [10]. Bayat and Lehtovaara show that the EHL and boundary performance of commercial EALs can be comparable or even superior to that of commercial mineral oils [5].

Polyalkylene glycols (PAG) are the products of the reaction between epoxides (e.g. ethylene and propylene oxide) with compounds containing active hydrogen (usually alcohols or water). Different compounds are produced by changing the ratio of the epoxides and the end groups. PAG has been used as lubricant in industrial applications as gear oil, compressor lubricant, metalworking and hydraulic fluid. Despite these applications, PAGs are not vastly used in industries, while they show high viscosity index, low pour point, good shear stability, good cleanliness. This low market share can be due to their high price, or their incompatibility with the common lubricants, however, it can be also due to the traditional thinking in the industry. [23]

PAGs have a VI value of around 200, which is usually higher than the VI of mineral oils [24]. The high polarity of PAG molecules give them strong affinity for metallic surfaces. This results in better boundary lubrication of the base oils, but it causes interference with the function of polar additives [24]. Polarity can be adjusted by choosing the proper monomer in production stage, which in turn it can alters their solubility in water and hydrocarbon lubricants. PAGs are the only water-soluble lubricant, and this characteristic can be considered as an advantage [23].

Regarding the environmental properties of PAGs, their toxicity is in the range of glycerol toxicity for low viscosity products, and similar to isopropanol toxicity in more viscous PAGs. This very low toxicity makes it an interesting lubricant in the food, pharmaceutical, tobacco and cosmetics industries [24]. Although PAGs have very low toxicity, their biodegradability is not high enough to pass the standards for being considered as Environmentally Acceptable by European environmental legislation. In case the lubricant industry can formulate non-water soluble PAGs with higher biodegradability, they can be an alternative to the esters in EALs [23,24]. The biodegradability of PAGs can be enhanced by decreasing their molecular weight (Low MW PAGs are more biodegradable), using co-polymer structure with a high ethylene oxide content (with higher biodegradability than propylene oxide) [23].

As a summary, the performance advantages of PAG lubricants are as follows:

More details about the chemistry and properties of PAGs can be found in [13,25]

The higher price of EALs is a barrier to their application [24]. In addition, tradition and user attitudes prevent companies to change their habits. Although, there are also positive drives that will make these oils more attractive: