The main goal of the spectroscopy techniques is to measure how much light is absorbed in each wavelength shined on any material. This is easily done by using the dispersive spectroscopic technique by shining the beam of light on the material and measuring the amount of light absorbed and emitted. This technique is applied in various fields such as chemistry, geology, biology, and materials, etc. The technique is very popular because it can analyze all gas, liquid, and solid samples. Fig-1 shows the FTIR setup by Bruker. 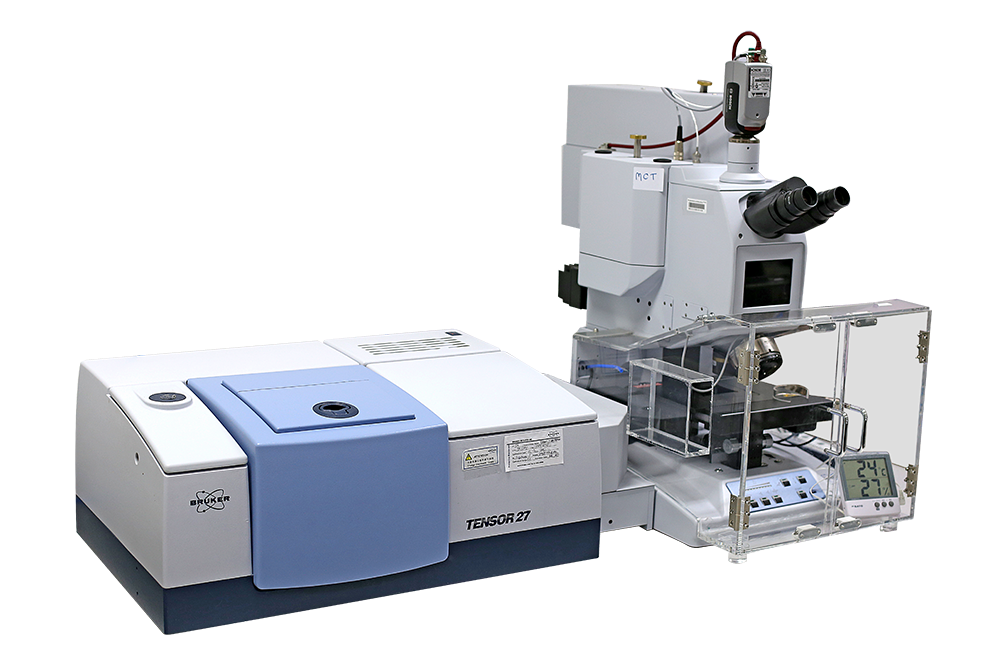 Fourier transform infrared spectroscopy (FTIR) is a spectroscopy technique that uses the mathematical method of Fourier transforms in analyzing the wavelengths absorbed by materials. In this technique, the beam of light containing various frequencies of light shines on the sample and measures the amount of beam absorbed by the material making a data point. This process of shining the light beam with various combinations of frequencies is shined by noting that particular point every time. These data points are then analyzed by the computer in a backward direction to measure the absorption at each wavelength. The schematic representation of FTIR is shown in Fig-2.

Fig-2 The schematic representation of FTIR [2]

FTIR spectroscopy is based on the idea that the interference of radiation between the two beams yields an interferogram. The latter is a signal produced as a function of the path length change between the two beams reflected from two mirrors (resides in the interferometer block). The two domains of distance and frequency are interconvertible by the mathematical method of Fourier transformation hence the name Fourier transform infrared spectroscopy. 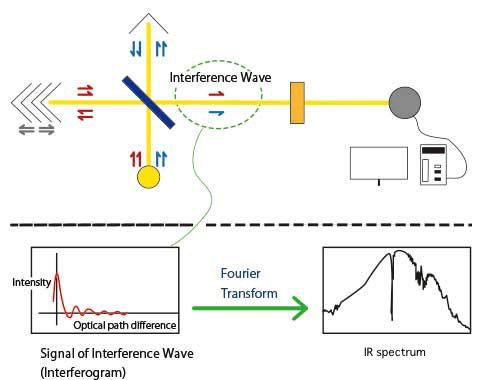 Fig-3 Schematic representation of the working principle of FTIR [3]

The main components in the FTIR are the IR sources, detectors, beam splitter, and Fourier transforms which are shown in Fig-4.

FTIR spectrometers are third-generation infrared spectrometers that have several prominent advantages. The signal-to-noise ratio of the spectrum is significantly higher compared to the previous generation IR spectrometers. The scan time of all frequencies is short; which is approximately 1s, and with an extremely high resolution of 0.1 ~ 0.005 cm-1. It has a very high accuracy of wave numbers and the scan range is wide (1000 ~ 10 cm-1). Also, the interference from stray lights is reduced, which is another important advantage.

The small size of the FTIR sampling chamber is one of the limitations and the mounted pieces can also obstruct the IR beam which limits the size of the samples to small ones. Some materials absorb infrared radiation completely causing the measurement to be impossible.