Mechanism of the oxidative wear: 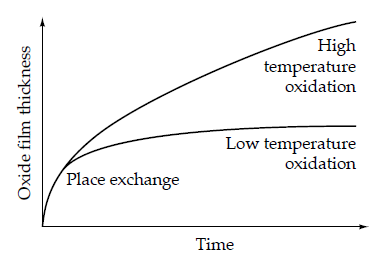 As the sliding speeds at the surfaces increases then the temperature on the surface increases which causes the formation of oxidative film and the process of oxidation is very rapid. After a period during the sliding, the oxide layers will start getting worn due to the fatigue on the surface [5]. At certain points, the temperature is so high giving rise to the formation of high spots which can be called oxide plateaux development. If there is mild wear, then these high spots get destroyed giving rise to the wear debris [6]. This mechanism of oxidative wear is shown in Fig- 4. 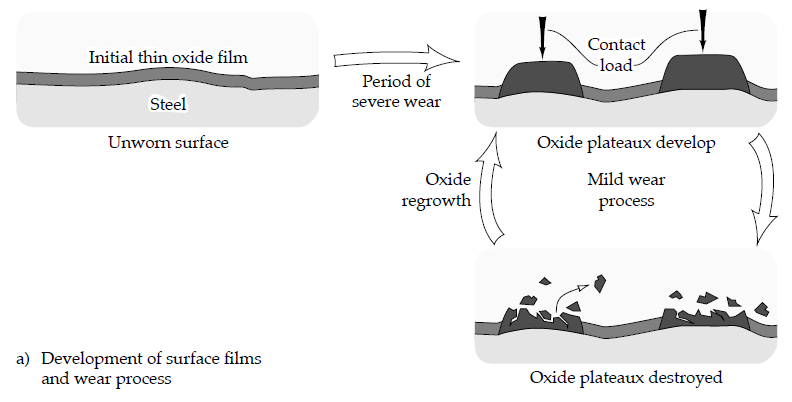 In the case of the sliding speed which is under a steady state then the oxidative wear mechanism follows the same trend as the above and the mechanism is illustrated in Fig- 5.

At low sliding speeds, conditions such as high temperature or friction are not possible and hence do not form rapid oxidation. However, there will be the formation of the oxidative layer which creates the mild wear forming the wear debris. This debris will get compacted and forms the oxide islands which helps in reducing the friction on the surface. The top surface of these oxide islands consists of the oxide films which are a mixture of oxides and metals [7]. This mechanism is illustrated in Fig- 6.

During the sliding, the interface of the surface experience a change in temperature that results in the formation of the oxide layer at the surface. This oxide layer formed will get disintegrated on a further increase in temperature due to sliding. There are formations of the oxide islands at the high points on the surface where the debris formation takes place. The interaction between the strained surface and the surface exposed to the oxide film upon continuous sliding will result in forming the wear particles due to adhesive contact. When the oxides in those regions get incorporated with the surface metal then it results in combinational wear particle which gets disintegrated from the surface interface due to the rolling effect. Thus, the wear debris with a combination of the metal and oxides will be formed at the interface creating further oxidation. This mechanism is explained using Fig- 7. 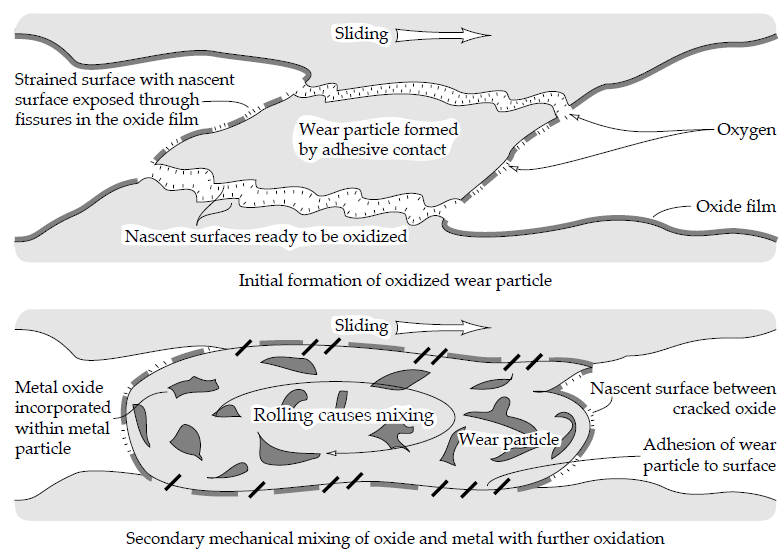