The interaction of light on materials is very different it may be transmitted, reflected, or scattered; the wavelength of the light affects the interaction with materials in different colors. This study of light is called spectroscopy. Based on this an Indian physicist C.V Raman observed the scattering phenomenon where the light is scattered by the molecules and hence this phenomenon was named Raman scattering. The analysis/characterization technique that deals with Raman scattering is Raman spectroscopy. In Fig-1 Raman spectrometer from S & N lab is shown. 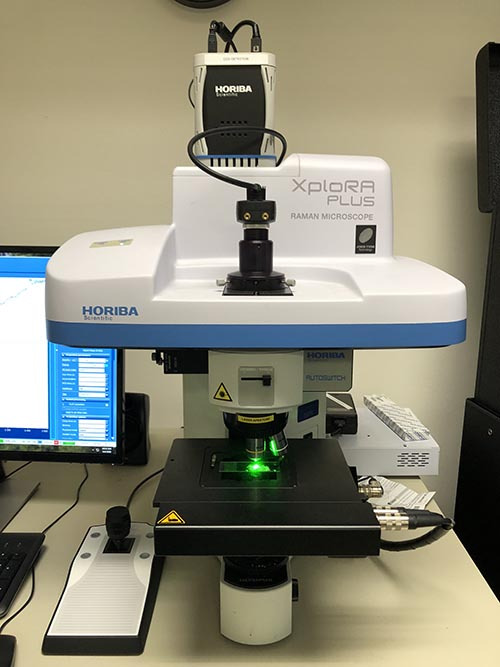 Raman spectroscopy is the analytical technique where scattered light is used to measure the vibrational energy modes of the sample. This technique provides both the information on chemical and structural characteristics of the material and also the identification of substances. The Raman spectroscopy extracts the information through the detection of Raman scattering from the sample. Fig-2 is the schematic representation of the Raman spectrometer. 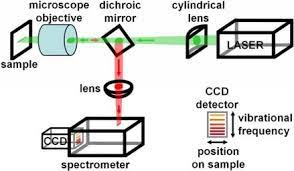 The working principle of Raman spectroscopy is based on the inelastic scattering of monochromatic light from a laser source which changes its frequency upon interaction with the material. Photons from the laser are absorbed by the samples and it is remitted with a frequency shift up or down in comparison to the original monochromatic frequency this is called the Raman effect. These shifts in the frequency provide information about the rotational, vibrational, and other low-frequency transitions in the molecules. This technique can be used in studying the materials like solid, liquid, and gaseous nature. In order to understand spectroscopy better, we should know the difference between Rayleigh scattering and Raman scattering. 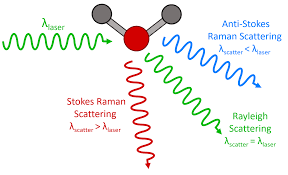 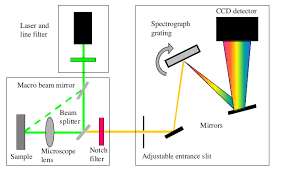 Fig-4 Schematic representation of Raman spectrometer with its components [4]

The information that is obtained from the Raman spectroscopy is useful in analyzing various aspects of the material compositions. The Raman shifts and relative intensities of all Raman bands of the material allow identifying the material. The individual band changes and shifts which are seen as narrow, or broad can be varied with the intensity of the light. These changes can reveal information about the stresses in the sample and variation in crystallinity. The amount of material and its composition can also be identified, the variations in spectra with the position of the samples also reveal the changes in the material’s homogeneity.

The advantages of Raman spectroscopy include its strength in specifying the chemicals in the materials which is a chemical fingerprint technique. There is no need for sample preparation and it is a non-destructive technique. The Raman spectra are acquired within a few seconds decreasing the processing time.

The disadvantages of Raman spectroscopy include that it can not be used in analyzing metals and alloys, and in most cases, it is not quantitative regarding the composition. The Raman effect is weak and the detection needs a very sensitive and highly optimized instrument. The fluorescence of impurities or of the sample itself can hide the Raman spectrum.