Tribology Wikipedia > What is grease?

Grease is a semisolid liquid that consists of a liquid lubricant mixed with a thickener. The oil does the lubricating while the thickener holds the oil and provides a resistance to flow. Soaps (a metallic element such as lithium, calcium, sodium, or aluminum reacted with a fatty acid) or fine particles of a lubricating additive, such as polytetrafluoroethylene (PTFE) or lead are used as thickeners in the grease [1]. The consistency of grease is such that it can be cut using a knife and also can flow under low pressure. Similar to oil lubricants the additives are added to grease to improve load-carrying ability, oxidation resistance, and corrosion control [2].

Grease has complex rheology hence it is a special lubricant. It has a multiphase formulation which includes the presence of both fluids and solids. Also, the rheological properties of the grease are dependent on both the shear rate and the duration of shearing. Grease can be defined, on the basis of its rheological characteristics, as a ‘lubricant which under the action of small loads at ordinary temperatures exhibits properties of a solid, and when the load is applied and at critical value it starts deforming to act like a liquid vice versa’ [3].

Lubricating grease consists of 65-95% base oil, 3-30% thickener and 0-10% additives. All these constituents provide the grease with a semi-solid structure. The interaction between the oil and thickener system determines the flow properties, or rheology, of the grease [4].

Shear stress: At very low stresses, no fluid behavior can be observed in greases within a reasonable time. Under these conditions, the fiber contacts are able to restrict the grease flow by mechanical obstruction. It is said that greases display apparent yield behavior, i.e. they only experience irreversible flow after minimum stress or strain has been applied, called ‘yield stress’ [5]. The yield stress is important for a number of practical reasons, since, for example, it prevents grease leakage and determines its sealing capability in a bearing. 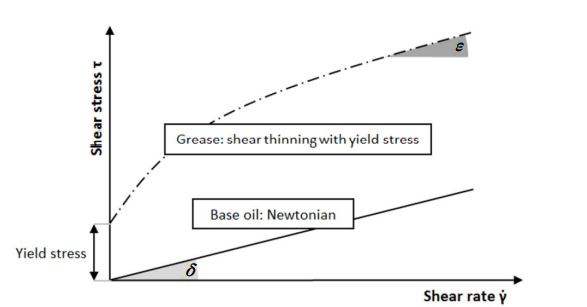 Above the yield stress, grease flow behavior is non-Newtonian, i.e. the relationship between shear stress and shear rate is nonlinear. In this respect, greases are classified as shear-thinning materials: they display a decrease in viscosity (often by several orders of magnitude1) with an increase in shear rate or stress. Therefore in the case of grease it is more correct to use the term ‘apparent shear viscosity’, rather than viscosity, to merely express the ratio between the shear stress τ and the shear rate γ̇. With increasing shear rates, eventually, a Newtonian value of viscosity is also reached in greases. This is generally different from their base oil viscosity, and is primarily dependent on the viscosity of the base oil, and the type and amount of thickener. The differences in the rheological behavior of grease and its base oil are illustrated in Figure-1, where tan (δ) is the viscosity of the base oil, and tan (ε) is the ‘apparent Newtonian viscosity’ of the grease, which is only reached at sufficiently high shear rates [6]. 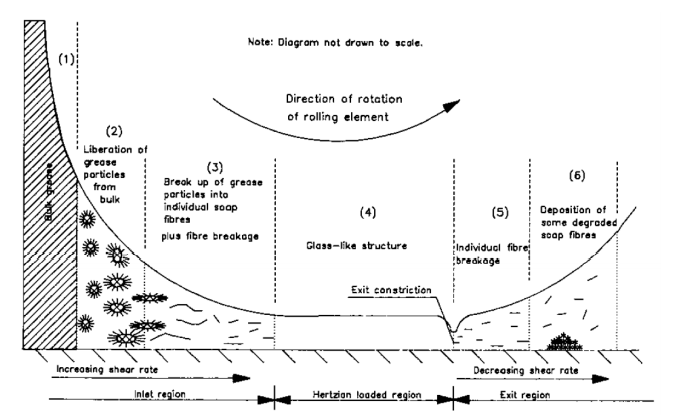 According to Cann et al. [8], the grease structure starts to break down into smaller clumps of entangled fibers, separated by base oil, at a comparatively long distance from the Hertzian contact. Progressive shearing of these particles takes place as they approach the inlet region until they are reduced to smaller individual particles which are partly expelled to the sides of the contact. It was suggested that the contribution of the thickener to the formation of the film completely depends on how the thickener affects the shear stability of the grease. The more the grease is shear stable, the higher the thickener fibers are able to survive the shear rates and stresses in the inlet region, and thus the greater is the film thickness enhancement. Hence, the thicker film observed with the calcium-thickened grease compared to the film obtained with lithium-thickened grease was explained as the result of former higher shear stability. However, we note that the shear stability is also a function of shear rate. 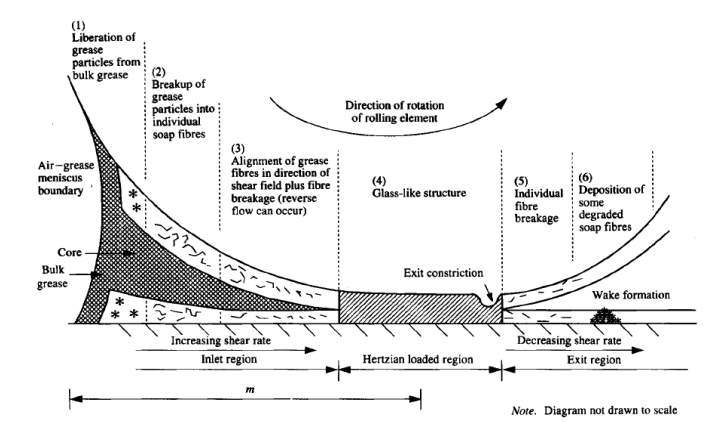 The same greases were tested by Williamson [14] at medium speeds. As opposed to what was found by Cann et al [8]. at low speeds, the lithium grease gave a thicker film than the calcium grease. Moreover, this study suggested that the thickener type did not only influences the extent to which it contributes in increase of the effective viscosity of the base oil, but also the way in which it affects the rheology of grease in the contact inlet. Indeed, in the test conditions used in this study, it was found that the greases behavior was either Newtonian (in lithium and calcium greases) or shear-thinning (in a polyurea grease). Hence, as previously indicated in the literature [15], these results led the authors to believe that not all the grease in the contact inlet is degraded. Instead, part of it can form a ‘core’ of bulk grease which remains undisturbed. Accordingly, entire grease structures would be allowed to survive and be entrained in the contact. Hence, the film formation mechanism proposed in Figure-2 was slightly changed according to Figure-3. It was suggested that the thickness of this core is related to the grease yield stress, controlling the resistance of the grease to deform plastically.