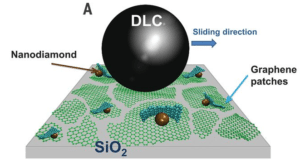 Friction rises when bodies come to contact and start relative sliding. This phenomenon occurs in many mechanical systems and it is estimated that over 30% of the fuel in cars is consumed to overcome friction. Taking into account the ongoing battle with the global heating, reduction of these losses is highly desirable.

The effect of superlubricity – vanishingly small friction coefficient – can help in this. Researchers have been working on the topic for quite a while and the state of superlubricity was first predicted theoretically and then confirmed experimentally.

Until recently, however, experiments were provided at atomic and micro-scale. Berman Diana with co-workers published a paper called “Macroscale superlubricity enabled by graphene nanoscroll formation”, where they achieved the friction coefficient as low as 0.0004 in dry sliding contact. They have demonstrated a stable macroscale ultra low friction between graphene patches coated silicon dioxide and diamond like carbon (DLC). Furhter, nanodiamond was added on top of silicon surface. The presence of nanodiamond was found to be crucial to achieve the superlubricity state.

Experimental observations made the researchers to conclude, that the main mechanism for development of the low friction is the wrapping of the nanodiamonds by graphene patches, which leads to formation of nano scrolls and formation of nano bearing. This was further supported by molecular dynamic simulations.

We would like to show you notifications for the latest news and updates.
Dismiss
Allow Notifications
Skip to toolbar