Abrasive wear is the type of wear mechanism that results in the disintegration of the material on the surface due to the influence of the hard particle in contact with the surface. It also occurs when a hard surface or particles interacts or slides on the soft surface and causes material loss [1]. This is a type of the wear that occurs due to the loading of solid particle on the surface of the material which is having hardness that is equal or lesser compared to the loaded particle [2]. 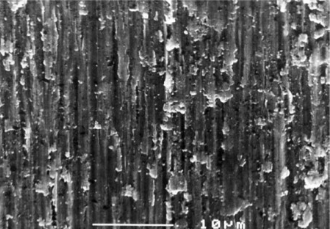 Abrasive wear can be caused in any condition on a surface in the presence of hard particles. for example, in case of the surface of the car tyre interacting on the road surface gets worn out very easily due to the interaction of softer tyre material with lower hardness compared to the road surface. The grooves can be found in abrasive wear tracks generated at the interface of the two similar metals experiencing sliding friction. There are also the formation of the wear particles or debris during this process that influence in further wearing on the materials surface [4]. The reason for the formation of the wear particles is due to the work hardening, phase transformation or the interaction of the third body at the interface [5].

Abrasive wear due to micro-cutting:

Abrasive wear due to fracture:

The wear caused due to the formation of brittle fracture generated by the crack initiated at the subsurface. There are mainly three modes of crack formation that includes vent cracks which propagates at 30degree to the surface, second mode is through localized fragmentation at the surface and the last is the deep median cracks [8]. The brittle fracture is formed due to the high loads acting on the sharp grits and due to the brittleness on the surface of the materials. This mechanism is illustrated in the Fig-3.

Abrasive wear due to fatigue:

Abrasive wear by grain pull out:

In this mode the wear occurs due to the removal of the materials on the surface by sharp grits or hard particles. This mode can be simply explained by an example of material removal by the sand paper on the opposite surface. The material displacement in this mode takes place due to the cutting or ploughing operations [11]. The two-body abrasive wear mode is illustrated in the Fig-6.

[1] Bhushan B. Principles and Applicaion of Tribology. New York: A Wiley-Interscience Publication; 1999.