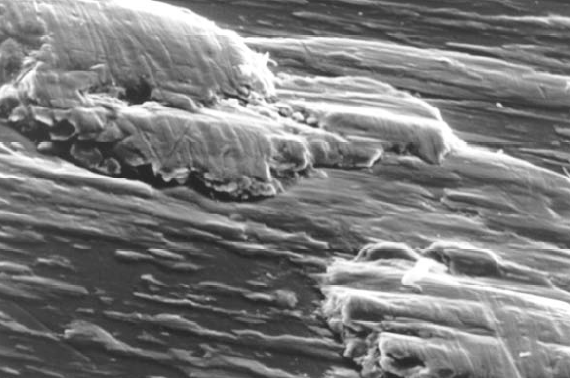 The laws can be written as:

By combining all the laws, the wear volume (V) is given by

Where, K depends on the type of contact (elastic/plastic), effect of the environment and mode of lubrication.

W is the applied load.

L is the sliding distance.

H is the hardness of the material.

The adhesion in case of the metal-metal interaction is independent of the mutual solubility of the metals and the relative atomic size. [3] When the stronger material encounters the weaker metal then the transfer of the material takes place by the weaker to stronger by adhesion as shown in the Fig – 2. However, the electrons on the surface of the metal are not bound strongly to the structure resulting in bonding with the other metal surface that leads to adhesion [4]. Metals with different crystal structures behaves differently with the adhesion, hexagonal closed packed structure shows lesser adhesion compared to the other crystal structures. Also, materials with larger elastic moduli, higher hardness and surface energy suppress the adhesion [5].

Fig-2 Process of metal transfer due to adhesion [1].

Severe plastic deformation occurs at these junction due to the combined action of adhesion and the sliding motion. When a constant vertical load is applied and a horizontal force is pulling either of the surfaces then there will be deformation in the series of shear bands causing the crack on the surface [9]. This mechanism is shown in the Fig – 3. 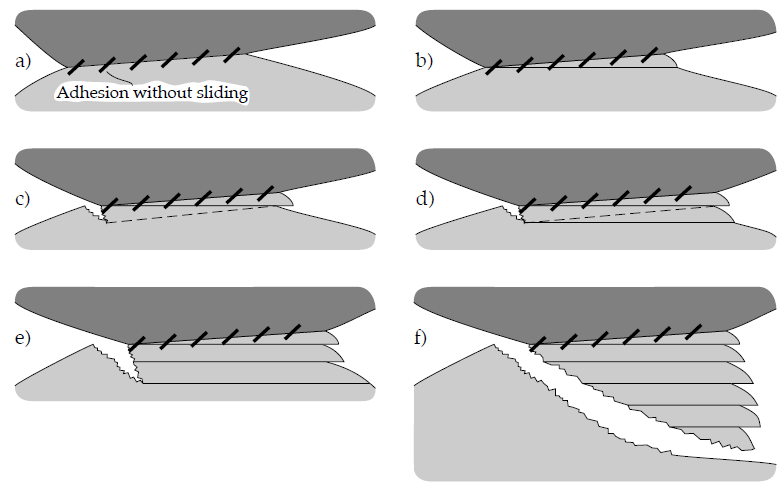 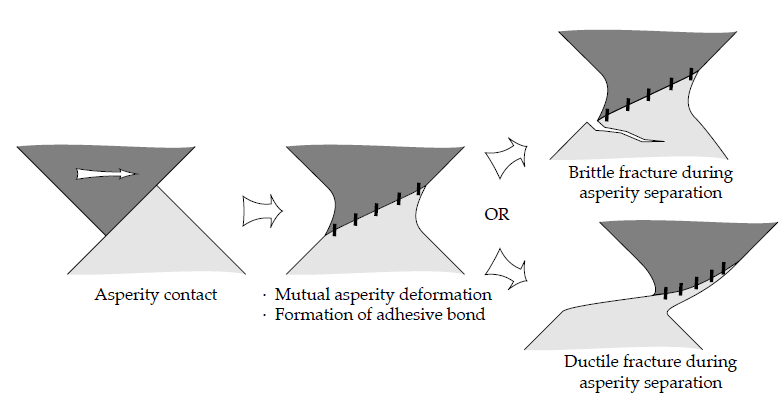 Transfer layer formation is the characteristic feature of the adhesive wear. The transfer layer which is formed due to the adhesion of the interacting surfaces is released to form the wear particles. When the interaction of the two metals takes place, there is a formation of mechanical alloying producing the transfer particle that consists of the lamellar of the two metallic surfaces [11]. The transfer layer formation mechanism can be explained using the Fig – 5. The sliding movement of the pin and disc forms the initial lump which is the transfer lamellar of the pin and disc surfaces. On further sliding motion, the lamellar reaches the critical size and withdraws from the interface forming the wear particles. 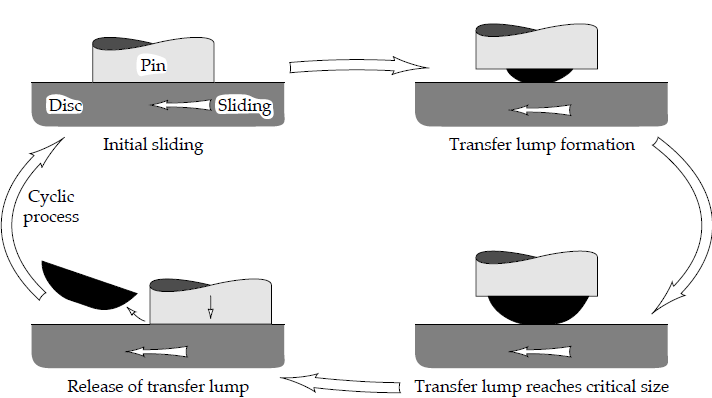 Fig- 5 Formation and removal of a transfer particle [1].

GA. Fontalvo et.al., studied the micro structural aspects of the adhesive wear in the tool steel (AISI M4), they found that the two main parameters influencing the wear behaviour was the carbide content in the materials and the distance between the carbides [12]. The adhesive wear of the fractal surfaces under normal contact was investigated for its adhesive wear mechanism. This investigation explained the effects of the surface material properties and interfacial adhesion on the adhesive wear of the rough surfaces in the fractal contacts [13]. K.P. Lijesh et.al., modelled the adhesive wear by considering the varying load sequence, in the past the Archard’s equations present the wear model based on the constant load theory however in this work, an attempt was made to study the wear volume based on the constant degradation of the friction coefficient under variable loading conditions [14].