The microscopic technology which is used to observe and measure the surface topography of the materials with greater resolution and accuracy is Atomic force microscopy (AFM). The major limitations of the Scanning tunneling microscope (STM) of requiring conductive samples for surface characterization are fulfilled by the AFM technology. The AFM acts as a synthesis of the optical profilometer and STM for surface characterization. The first publication on the atomic resolution of graphite was published by Binning and coworkers [1]. The application of AFM can be implemented in any sample which is hard or soft; the hard samples such as ceramics or metallic nanoparticles etc. soft samples such as flexible polymers, human cells, etc. Also, the AFM technology is implemented in most of the research areas which include physics, chemistry, biology, nanotechnology, material science, medicine, astronomy, etc. The three basic components of the AFM are the transducer, force sensor, and feed-back system [4]. These are the most important components that constitute the AFM and the schematic representation of the AFM along with its components are shown in Fig-2. 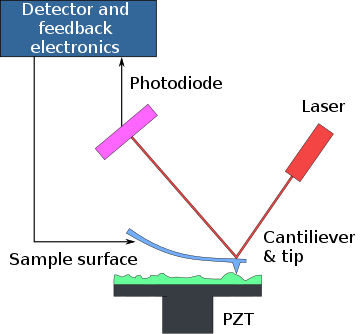 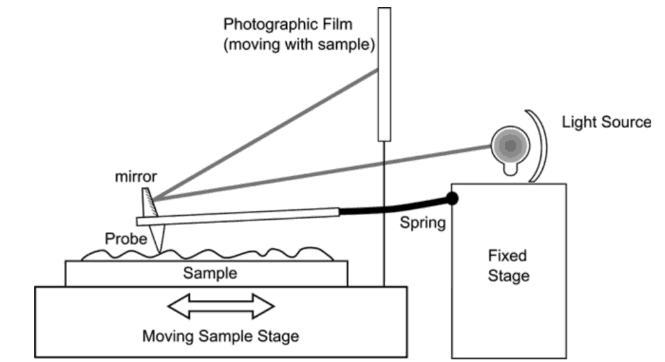 There are basically two modes of working which includes static and dynamic modes, they can also be named the contact and noncontact modes. In the case of the dynamic or noncontact mode, it is further categorized as tapping/intermittent contact and non-contact modes depending on the interaction forces between the tip and the surface. The working modes of the AFM are shown in Fig-4. 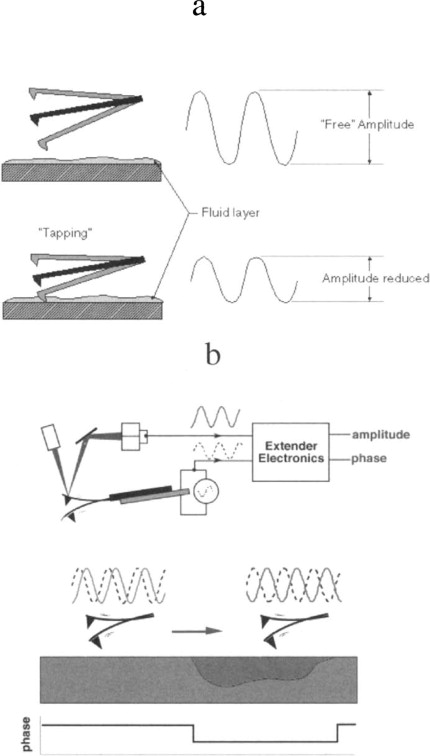 The advancement in the topographical analysis of any material surface is achieved using the AFM technology. There are various research performed using the AFM technology for analyzing the different materials ranging from nano to micrometers. The AFM technology was used by researchers to analyze the carbon nanotubes which helped in understanding the structural properties of the carbon nanotubes [7]. Shaoyang Liu et.al. studied the review on AFM application in the field of microbiology where they discussed the various research on morphological characteristics of microbes and the use of force-distance curves to understand the interaction of the microbial samples at the nanometer and cellular levels [8].