Reciprocating contacts are common in many engineering applications, e.g., hydraulic/pneumatic cylinders, crank-slider mechanisms (piston rings-cylinder), fretting vibrations, cyclic stresses, etc. The coefficient of friction in a reciprocating contact is usually detrimental when designing the component and often determines the mechanism service time. A higher coefficient of friction predicts a shorter lifespan in fretting fatigue for example [1]. Oscillating tribometers (or reciprocating tribometers) replicate the nature of these contacts so the tribological characteristics of the real component contact can be simulated in the lab (model scale).

The frictional characteristics of a reciprocating (or oscillating) contacts are usually presented using the tangential force hysteresis loop (also referred to as “fretting loop”), i.e., the tangential force Q (y-axis) over its position Δ (x-axis) along a full cycle: forward and back strokes. Alternatively, the Coefficient of Friction (Q/P) over a dimensionless position (Δ/Δ*) is used, as shown in Figure 1. Being P the contact force and Δ* the contact stroke. Notice that the slope S of the cycle shows the stiffness of the contact system. the Unfortunately, the friction over a reciprocating cycle is hardly ever constant, i.e., the Coulomb Friction theory does not apply, hence a method must be selected to represent the whole cycle with a single scalar value.

Maximum value of the tangential force over a cycle (maxCoF)

This method simply considers the maximum CoF (Q/P) over a cycle. As a cycle presents two maximums, one for the forward stroke and one for the backward stroke, the average of them is usually presented. This method is effective for ideal parallelogram-shaped loops, i.e., where Coulomb’s friction law applies however usually overestimates the CoF of a cycle. Additionally, since this method relies on only two data points, The resulting maxCoF often depends on the filter used on the tangential force signal. 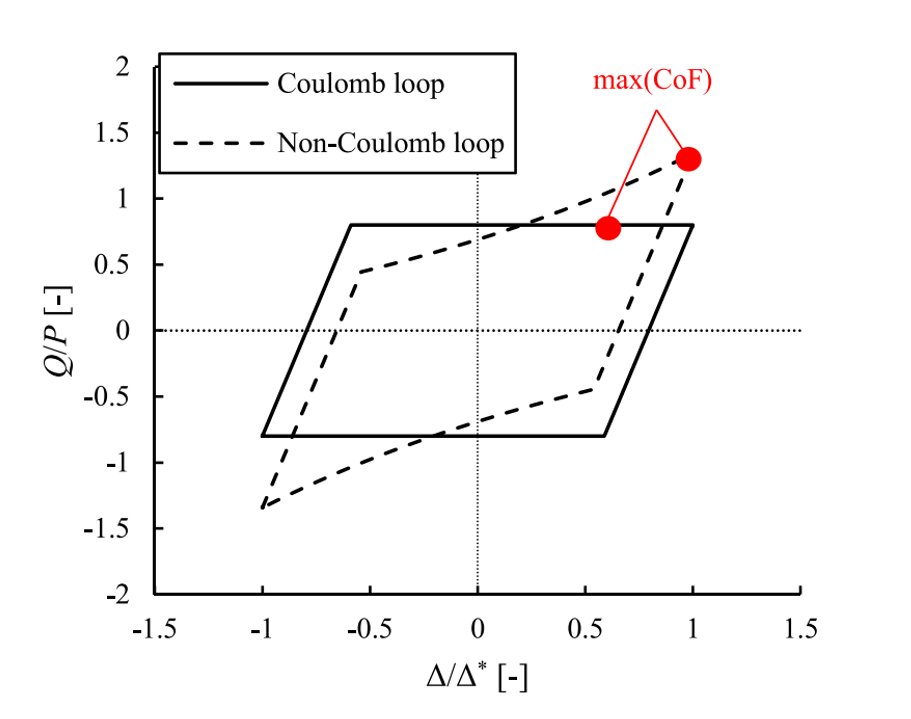 In this case, then mean absolute value of each cycle is computed. This method is useful in applications in which the sliding part is significantly higher than the sticking part. That is when the velocity approces zero at the beginning and the end of the stroke. Due to the constant sampling rate, the most part of the data points acquired belong to the part of the cycle where the velocity is lower. This can lead to an overestimation of the CoF. 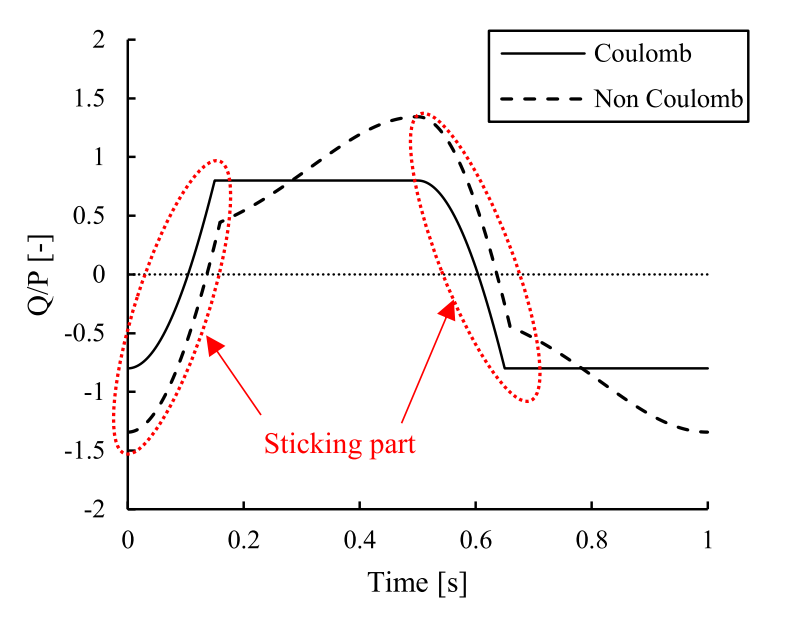 To focus on the sliding portion of the cycle, only a percentage of the cycle is often considered. Two approaches were found:

There is no consensus on which window should be considered and hence this leads to extra degrees of freedom which need to be considered in advance.

This method consists in estimating the energy dissipation Ed over a tangential force hysteresis loop. The δ* is the slip amplitude. The ECoF (µe) method was proven to be robust, and it evolved to an ASTM standard [4].

A fourth method is presented by Mulvihill et al. considering the shape of the wear scar. The model proved that a hook-like behaviour can results when a parabolic wear scar is considered. Further details can be found in [2] and [5].