Corrosive wear is a type of wear in which the material surface gets disintegrated due to the chemical reaction between the material surface and the corroding medium which can be either a chemical agents, lubricants or atmospheric mediums. This is a common type of the wear which is termed in case of any wear caused due to the chemical reaction or the corrosion. Since this wear is characterised by both wear and corrosion processes the material experiencing this would undergo severe damage or material loss [1]. The corrosive wear in the iron pipe is shown in the Fig- 1. 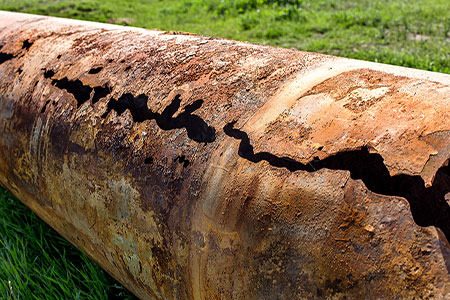 Corrosion mechanism can be explained in different ways depending on the type of medium underlying the process of corrosion and the presence of corroding materials. Considering an interface of the material in a sliding condition in a lubrication medium experiencing a corrosion then the following modes of interaction between the corrosive agent and the worn surface can be observed. 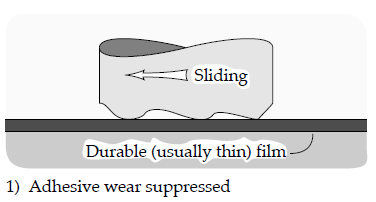 In this case the film formed due to the products of the corrosion is able to suppress the adhesion by acting as the sacrificial layer. However, there is a formation of the corrosive wear, and this kind of films can be seen in case of the ionic compounds or the brittle oxides [3]. The schematic representation of this mode is shown in the Fig- 3. 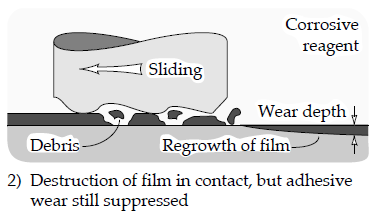 In this mode of corrosive wear the protective thin film formed would be completely worn out resulting in figures and pitting son the surface. Due to the presence of the large pitting the anodic dissolution on the surface takes place causing intense corrosion on the medium. The schematic representation of this mode is shown in the Fig- 4. 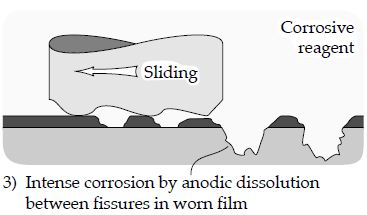 Separation of corrosion and wear:

In this mode, the corrosive products formed are weak and are soluble in the liquid medium hence the wear and corrosion acts independently on the surface. There are regions where the adhesive wear are predominant and in some regions the corrosion is progressed [4]. This mode is shown the Fig- 5. 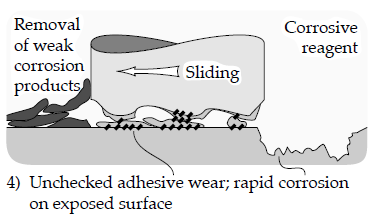 As we have seen from the modes of corrosive wear formation, the basic characteristic of the corrosive wear is the formation of the corrosion films. The corrosion films formed are initially protecting the surfaces from both corrosion and adhesion which if it’s a sacrificial film then results in subsequent loss due to the mechanical agitation on the surface medium. This process of formation of film can be modelled to predict the wear performance over time [5]. 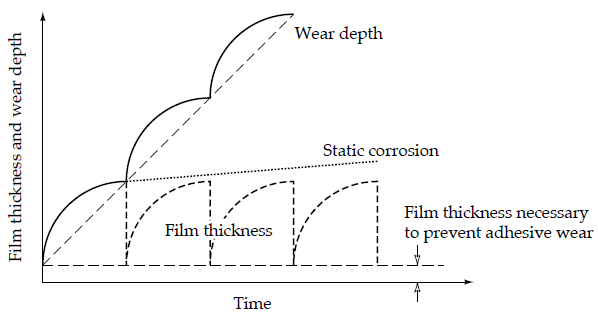 The Fig- 6. Shows the graph of film thickness/wear depth versus time. Over the gradual increase in the time in corrosive wear the formation of the passivating film takes place which as certain thickness preventing the adhesive wear and maintain the stable corrosion wear. However, due to the increase in friction temperatures due to sliding prevent the formation of this film [6].

Synergism between the adhesion and corrosion: 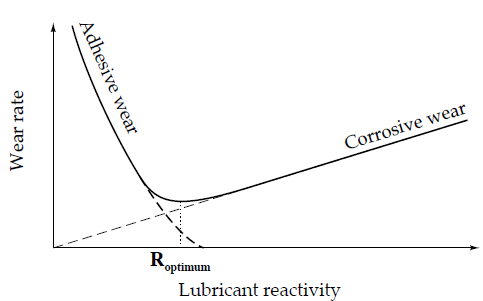 X.H. Tang et.al., studied the variations in the microstructure of the high chromium cast irons in resistance to wear and corrosion. It was found that the corrosion resistance of these alloys were dependent on the Cr concentrations and the volume of carbides present [8]. There are several attempts made to study the solution treatments for reducing the corrosion and wear, Bing He et.al., found the solution treated 316L layer fabricated on laser cladding to reduce the corrosive and wear resistance [9]. The corrosion and wear resistance can be performed in different methods by modifying the surfaces, by coating the surfaces, by providing the lubrication etc. Kenneth et.al., used the rice husk ash (RHA) and alumina reinforcements on the Al-Mg-Si alloy matrix, they found that increasing the RHA wt% resulted in increasing the wear rates [10].