The meaning of creep as per the English dictionary is as follows: creep is essentially an act of moving slowly and carefully in order to avoid being heard or noticed. Well, this is what people studying English literature would think of creep but for us, engineers or scientists, creep very interestingly indicates the same. So in a very generic fashion, if we have to define creep, Creep refers to plastic deformation that generally happens so slowly that it remains imperceptible by and large, but could suddenly surprise you with the enormity of its damage unless it is closely studied, monitored, and accounted for. So you can clearly see the kind of analogy that one can draw with the English dictionary definition of creep. So creep is going to happen slowly, move slowly and so slowly so there is a correlation there and because it happens slowly it is not dynamic enough such that you will not know that deformation is occurring by creep but creep plays an important role because the damage that happens in the wake of creep could be enormous and hence it is necessary to study it closely and account for it when you design and maintain a product.

Creep may be defined as a time-dependent deformation at elevated temperature and constant stress. It follows, then, that a failure from such a condition is referred to as a creep failure or, occasionally, a stress rupture. The temperature at which creep begins depends on the alloy composition.

At elevated temperatures and stresses that are much less than the high-temperature yield stress, metals undergo permanent plastic deformation called creep. Figure 1 shows a schematic creep curve for a constant load; a plot of the change in length versus time. The weight or load on the specimen is held constant for the duration of the test. There are four portions of the curve that are of interest: 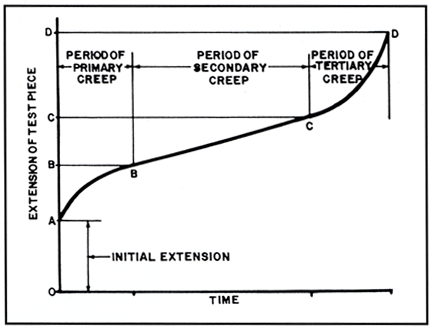 An initial steep rate that is at least partly of elastic origin, from point “0” to point “A” in Figure 1.

This is followed by a region in which the elongation or deformation rate decreases with time, the so-called transient or primary creep, from region “A” to “B” of Figure 1. The portion from point “0” to point “B” occurs fairly quickly. The next portion of the creep curve is the area of engineering interest, where the creep rate is almost constant. The portion from “B” to “C” is nearly linear and predictable. Depending on the load or stress, the time can be very long; two years in a test and several decades in service.

The fourth portion of the creep curve, beyond the constant-creep-rate or linear region, shows a rapidly increasing creep rate which culminates in failure. Even under constant-load test conditions, the effective stress may actually increase due to the damage that forms within the microstructure.

Without going into a detailed discussion of the atom movements involved in creep deformation, suffice it to say that creep deformation occurs by grain-boundary sliding. That is, adjacent grains or crystals move as a unit relative to each other. Thus, one of the microstructural features of a creep failure is little or no obvious deformation to individual grains along the fracture edge.

The first two stages will not leave any microstructural evidence of creep damage. Somewhere along the linear portion of Figure 1, the first microstructural evidence of damage appears as individual voids or pores. The location of these first voids or holes varies, often noted at the junction of three or more grains, occasionally at nonmetallic inclusions. These individual voids grow and link to form cracks several grains long, and finally, failure occurs. The ultimate rupture is by a tensile overload when the effective wall thickness is too thin to contain the steam pressure.

Figure 2: Failure of a boiler tube due to creep

The mechanism of creep depends on temperature and stress. The various methods are:

The most common mechanism is climb-assisted glide.

Some alloys exhibit a very large stress exponent (n > 10), and this has typically been explained by introducing a “threshold stress,” σth, below which creep can’t be measured. The modified power-law equation then becomes:

where A, Q, and n can all be explained by conventional mechanisms (so

Nabarro-Herring creep is a form of diffusion-controlled creep. In N-H creep atoms diffuse through the lattice causing grains to elongate along the stress axis. For Nabarro-Herring creep k is related to the diffusion coefficient of atoms through the lattice, Q = Qself diffusion, m=1, and b=2. Therefore N-H creep has a weak stress dependence and a moderate grain size dependence, with the creep rate decreasing as grain size is increased.

Nabarro-Herring creep is found to be strongly temperature-dependent. For lattice diffusion of atoms to occur in a material, neighboring lattice sites or interstitial sites in the crystal structure must be free. A given atom must also overcome the energy barrier to move from its current site (it lies in an energetically favorable potential well) to the nearby vacant site (another potential well). The general form of the diffusion equation is D = DoExp(Ea / KT) where Do has a dependence on both the attempted jump frequency and the number of nearest-neighbor sites and the probability of the sites being vacant.

Thus there is a double dependence upon temperature. At higher temperatures the diffusivity increases due to the direct temperature dependence of the equation, the increase in vacancies through Schottky defect formation, and an increase in the average energy of atoms in the material. Nabarro-Herring creep dominates at very high temperatures relative to a material’s melting temperature.

Coble creep is still temperature-dependent, as the temperature increases so do the grain boundary diffusion. However, since the number of nearest neighbors is effectively limited along with the interface of the grains, and thermal generation of vacancies along the boundaries is less prevalent, the temperature dependence is not as strong as in Nabarro-Herring creep. It also exhibits the same linear dependence on stress as N-H creep.

Sometimes the dislocation creep field is further divided into two fields: low- and high-temperature dislocation creep fields. At further low stresses, volume diffusion creep (Nabarro–Herring creep) and grain boundary diffusion creep (Coble creep) dominate. The boundaries between adjacent fields in the creep region indicate the conditions under which two mechanisms contribute equally to the overall creep rate. Using an appropriate constitutive equation for creep rates as functions of stress and temperature, we can calculate the creep rates and can draw the boundaries. This also allows us to plot the contours of constant creep rate onto the map, as shown schematically in Fig. 2. 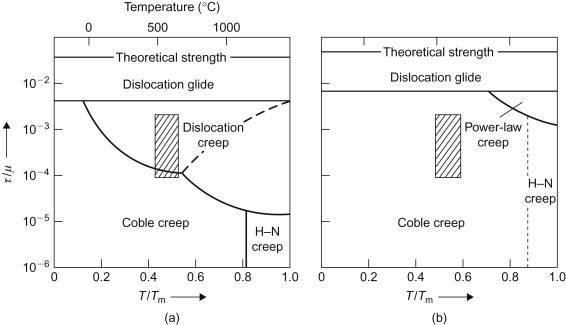 Creep can occur in polymers and metals which are considered viscoelastic materials. When a polymeric material is subjected to an abrupt force, the response can be modeled using the Kelvin-Voigt Model. In this model, the material is represented by a Hookean spring and a Newtonian dashpot in parallel. The creep strain is given by:

When subjected to step-constant stress, viscoelastic materials experience a time-dependent increase in strain. This phenomenon is known as viscoelastic creep.

At a time t0, a viscoelastic material is loaded with constant stress that is maintained for a sufficiently long time period. The material responds to the stress with a strain that increases until the material ultimately fails. When the stress is maintained for a shorter time period, the material undergoes an initial strain until a time t1, after which the strain immediately decreases (discontinuity) then gradually decreases at times t > t1 to a residual strain.

Both polymers and metals can creep. Polymers experience significant creep at all temperatures above ~-200°C, however, there are three main differences between polymeric and metallic creep.

Creep damage and microstructural degradation occur simultaneously. For carbon steels and carbon-1/2 molybdenum steels, iron carbide will decompose into graphite. For the low-alloy steels of T-11 and T-22, the carbide phase spheroidized. Thus, creep failures will include the degraded microstructures of graphite or spheroidized carbides along with the grain-boundary voids and cracks characteristic of these high-temperature, long-time failures. 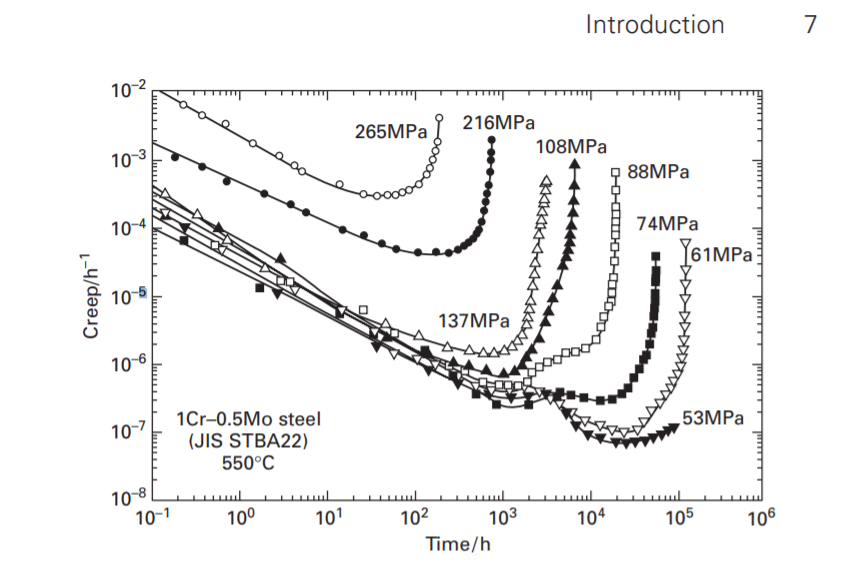 Creep deformation is important not only in systems where high temperatures are endured such as nuclear power plants, jet engines, and heat exchangers but also in the design of many everyday objects. For example, metal paper clips are stronger than plastic ones because plastics creep at room temperatures. Aging glass windows are often erroneously used as an example of this phenomenon: creep would only occur at temperatures above the glass transition temperature around 900°F/500°C.

An example of an application involving creep deformation is the design of tungsten lightbulb filaments. Sagging of the filament coil between its supports increases with time due to creep deformation caused by the weight of the filament itself. If too much deformation occurs, the adjacent turns of the coil touch one another, causing an electrical short and local overheating, which quickly leads to failure of the filament. The coil geometry and supports are therefore designed to limit the stresses caused by the weight of the filament, and a special tungsten alloy with small amounts of oxygen trapped in the crystallite grain boundaries is used to slow the rate of coble creep.

In steam turbine power plants, steam pipes carry superheated vapor under high temperatures (1050°F/565.5°C) and high pressure often at 3500 psi or greater. In a jet engine, temperatures may reach 1000°C, which may initiate creep deformation in a weak zone. For these reasons, it is crucial for public and operational safety to understand the creep deformation behavior of engineering materials.