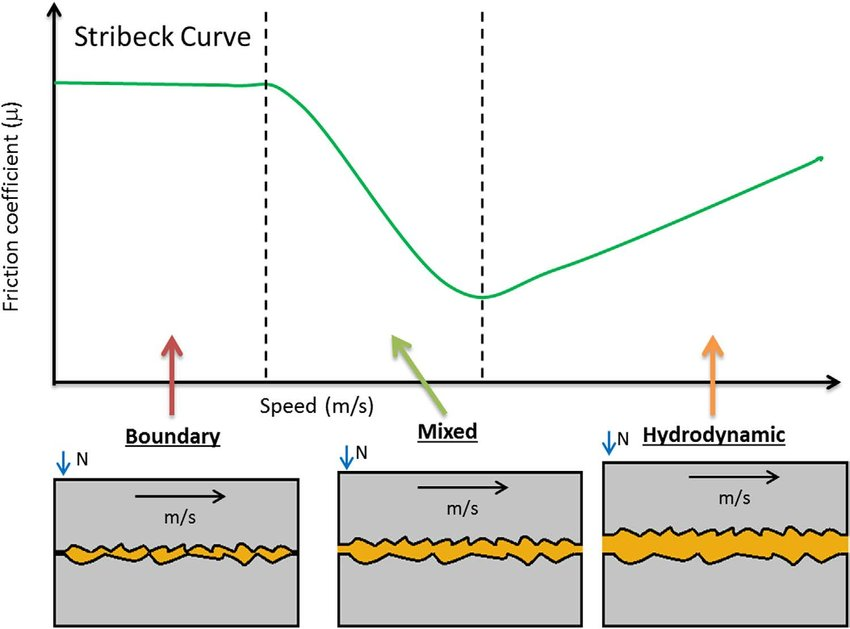 The hydrodynamic lubrication regime is formed when there is no contact between the surfaces at the sliding interface and there is a gap of separation at the interface due to thick lubricant film formation. In the case of bearings, hydrodynamic lubrication occurs mainly when the rotation speeds are high and relatively low bearing loads. The thick lubricant film formed at the surface keeps the surfaces apart due to the force called hydrodynamic lift. This kind of lubrication helps in providing better tribological properties and improves the frictional behaviors of the mechanical components in most conditions. The schematic representation of the hydrodynamic regime is shown in the Fig-2. 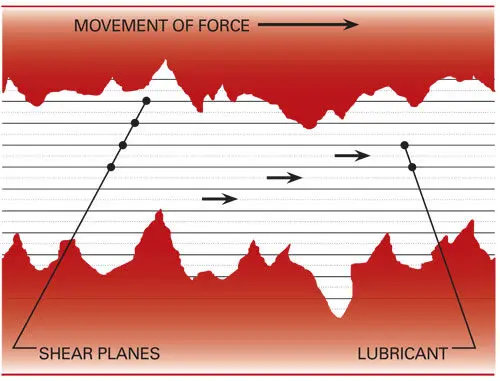 Conditions for formation of the hydrodynamic regime: 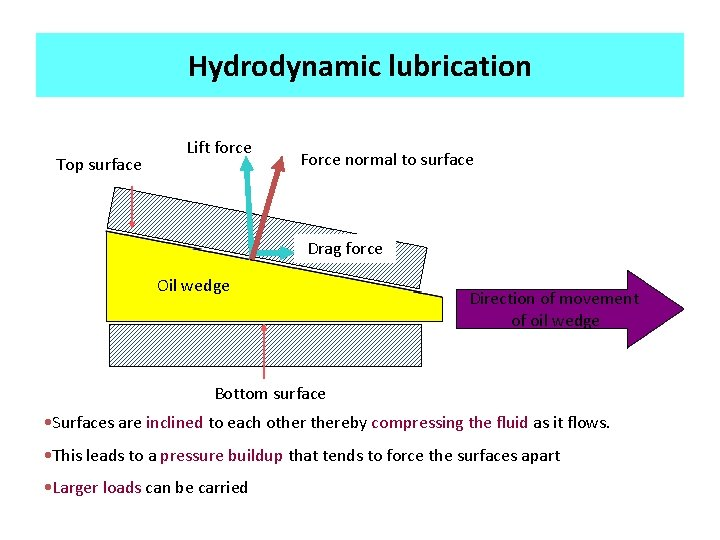 The theoretical analysis of hydrodynamic lubrication was studied by Osborne Reynolds. Certain assumptions were made in order to derive the equation where he considered the lubricating fluid is a Newtonian fluid. The flow of the lubricant fluid must be laminar, the fluid inertia is neglected, and keeping the fluid density constant. The viscosity of the fluid is maintained constant throughout the generated fluid film with no slip at the boundaries. The body forces are also neglected, and the pressure is maintained constant throughout the film [5].

Considering these following conditions, the flow layers is proportional to the velocity gradient in the direction perpendicular to the flow. The equation can be written as;

Where τ is the shear stress, η is the dynamic viscosity of the oil, v is the linear velocity of the laminar layer and y is the axis perpendicular to the flow direction.

Physical characteristics of the hydrodynamic lubrication:

The thickness of the lubricant film in case of the hydrodynamic lubrication is a very important factor that must be considered to improve the efficiency of the mechanical components working under this regime. The two important physical parameters affecting this lubricant film thickness are the fluid velocity and the load acting on the contact interface.

The hydrodynamic pressure can vary by varying the orientation of any of the surfaces at the interface leading to different pressure generation. This leads to various applications; the effects of change in pressure are shown in Fig-4. The different orientation shows different effects of the pressure, these effects can be classified as a wedge, stretch and squeeze effects. [5] O. Reynolds, On the Theory of Lubrication and its Application to Mr Beauchamp Tower’s ExperimentsIncluding an Experimental Determination of the Viscosity of Olive Oil, Phil. Trans., Roy. Soc. London, Vol. 177 (i), 1886, pp. 157–234.

[7] Uddin, M.S. and Liu, Y.W., 2016. Design and optimization of a new geometric texture shape for the enhancement of hydrodynamic lubrication performance of parallel slider surfaces. Biosurface and Biotribology, 2(2), pp.59-69.