Rolling element bearings are a widely used machine elements and they are used to allow rotation of or around shafts in many different machines, such as bicycle, cars, electric motors, aircraft turbines, mills, etc. The main advantage of rolling bearings is their low friction, since the resistance to the motion is only driven by the rolling friction which is much lower typically than the sliding friction. The design of the rolling-element bearings ensures their reliability while reducing the impact of variations in speed, temperature, load, and lubricating conditions. At the same time, the maintenance required for such bearings is typically much easier as compared to the other types of bearings. All these features coupled with availability and efficiency of the bearings contribute to a wide use of rolling element bearings in various applications.

Bearing selection is a process of matching of a particular bearing and the application requirements, including load, misalignment, speed, and torque. 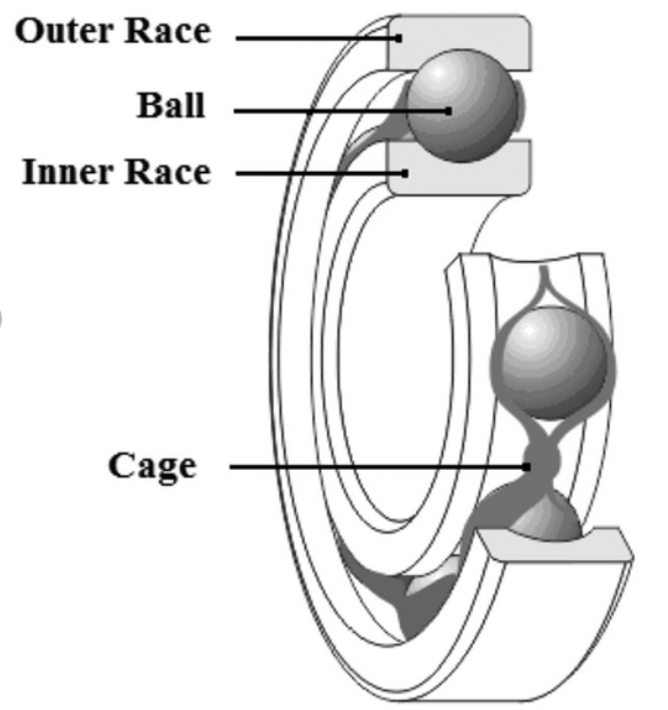 Rolling-element bearings exist in many different forms with each one having a unique set of features. The suitability of a rolling-element bearing to a particular application is based on the match between these features and the application requirements. In such a context, it becomes essential to consider certain factors when selecting the most suitable type of bearing. According to SKF (the leading rolling element bearings manufacturer, link?) catalogue, the following are key factors for the optimum bearing selection:

In addition to these factors, it is essential to consider not only the bearing itself, but the whole assembly, like shafts and housing. Thus, for an optimum bearing selection, one must also consider the following factors:

Types of Rolling-Element Bearings and Their Performance

The rolling element bearings can be classified in various ways, e.g.. by the direction of the carried load, roller geometry, or by a particular feature of the bearing. However, the most common classification is based on the geometry of the rolling elements:

The most common type is the ball bearing, their rolling elements are ball shaped (see the figure above). The contact area is relatively small in this case and, as a result, these bearings are quite efficient at high rotating speeds, showing the lowest friction torque. Additionally, they are very cheap to manufacture. However, the disadvantage of a ball bearing is its limited load-carrying capacity, especially in radial direction.

The cylindrical roller bearings contain cylindrical rollers, see the figure above. In this case the contact area between a roller and the raceway is larger as compared to the ball bearings. This makes this type of bearings to outperform other types of bearings in radial load carrying capacity. Simple roller geometry allows a tight manufacturing tolerance and rollers are typically crowned at the edges to mitigate the roller-end edge stresses. In addition, they have a relatively low-friction torque and medium speed capability. At the same time, their performance is quite sensitive to misalignment and they wear out quickly when the alignment is poor.

Turning to tapered roller bearings, these types of roller geometry bearings have tapered rollers as the rolling elements. Like cylindrical roller bearings, they also have a relatively large contact with the raceways and are guided by a thrust flange at the large roller ends. In terms of load-carrying capacity, these roller bearings support heavy loads in the axial or radial directions. This makes them possess the highest combined load-carrying capacity. Notably, the design of these rollers requires the machining of both the roller large-end and the roller body thereby making them the most expensive bearing to manufacture, but quite advantageous in terms of durability and fatigue resistance.

Moving to spherical roller bearings, this type of bearings utilizes double-row barrel-shaped rollers as the rolling elements. The standard design of these roller bearings assumes the radius of the roller that aligns closely to the radius of curvature of the outer raceway. This geometry assumes an elongated and mostly truncated elliptical contact with both the raceways. Their ability to support combined axial and radial loads or radial loads is above average and these bearings are durable, highly resistant to fatigue and rather tolerant to misalignment. At the same time, they are unsuitable for high-speed applications due to highest friction torque.

Finally, the needle roller bearings have rolling elements that are long and cylindrical. They result in long line contacts with the raceways similar to the case with the cylindrical roller bearings. However, due to their length, they have a low tolerance to misalignment and increased risk of roller sliding. As a result, these types of roller geometry bearings have high frictional torque and the lowest limiting speed. The needle roller bearings are also quite disadvantaged in handling the combined axial and radial loads. However, they possess an attractive trait of compactness as the volume requirement for their installation is relatively small and most significantly, their manufacturing cost is low making them affordable.

The selection of an appropriate bearing for a particular application requires a consideration of the bearing features and the application requirements that need to be fulfilled. Several attributes differentiate the types of bearing namely the loading conditions, the speed, the bearing torque, tolerance to misalignment, etc. Nowadays, bearing manufacturers provide the users with the online tools to select a suitable bearing for a given application. An example of such tool is Bearing Select from SKF link. This is a very simple and fast way of getting a right bearing for the given use.

The features possessed by the rolling-element bearings make them suitable for certain applications. For instance, cylindrical roller bearings are popular in rolling mills, machine tool spindles, and mid- to heavy-duty electric motors. High radial load-carrying capacity, precision, high support stiffness, high-speed capability among others makes them suitable for such applications.

The ball bearings are used in electric vehicles motors where the load is usually combined or radial and relatively low, while the speed range is rather broad, reaching quite high levels. The bearings are also found in light-duty gearboxes, conveyor rollers, and small vehicles. The important aspects for the selection include light load, dual load-carrying capacity, and low cost.

The tapered roller bearings represent a better choice when looking for a bearing that supports combined axial and radial loads as well as high load. As a result, they are used in the wheels of off-road vehicles, passenger cars, gearboxes of marine drives, landing wheels of aircrafts, printing presses, other transmission systems, and machine tool spindles. Particular factors such as heavy load carrying capacity and adjustment ability that facilitate precision and stiffness should be considered during the selection process.

Finally, needle roller bearings are utilized in automotive transmissions due to their compactness and affordability. Some industrial gearbox and pump manufacturers also use them.