Analyzing the material’s surface characteristics with precision is very important for mechanical component parts and there are various techniques that are sophisticated and precise. There are various 2D and 3D surface profilometers and optical measurements are mostly used because of their non-destructive and non-contact methods of surface analysis. However, in many industries and in case of the highly reflective materials the conventional method of stylus profilometry is applied [1]. Fig-1 shows the stylus profilometer by RES surface engineering. 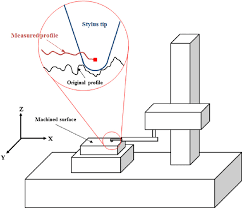 The most important part of the stylus profilometer is the cantilever tip because this tip makes physical contact with the measuring surface. The dimensions of this tip are very important to be considered where the radius of the stylus tip should be very small with low contact pressure. The materials used in this stylus tip are diamond and sapphire and the shape of the tip is usually a ballpoint tip with a conical shape. The measurement data from this stylus profilometer is very reliable as they make the contact based measurements. 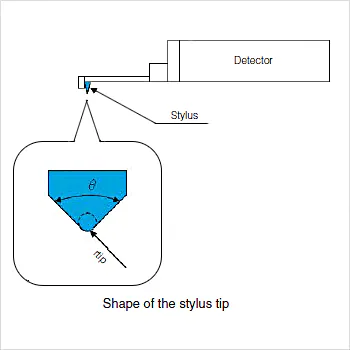 Fig-4 Stylus tip of the profilometer [7].

The stylus profilometer is a contact-based and destructive technique for analyzing the topographical characteristics of the material surface. The major advantage of this technique is its capability of long-distance measurement and clear wave profile of the surface roughness.

The disadvantages of this method involve the physical contact of the stylus tip over the surface which leads to stylus wear. The measuring pressure maintained to trace the surface can cause scratches on the samples, however, this technique is unable to measure the topography of the viscous samples. The measurement is very time-consuming and is limited to the radius of the stylus tip. The sample preparation is one of the important steps that has to be considered during this technique where the samples might be cut and processed for tracing the detectors. The initial positioning of the stylus tip over the surface is another difficult task.

The stylus profilometer is a traditional method that uses physical contact over the surface for the topographical analysis, there are various researchers who have studied the performance using various calibration techniques. Kyung Joong Kim et.al., studied a new calibration technique for a stylus profilometer using multiple delta layer films [8]. The stylus profilometer technique determines the very accurate wave profile of the surface hence it is mostly used in medical applications. Massimiliano Merloa et.al. studied the tribological characteristics of the hip femoral head affected by metallic debris and found that the surface roughness of the femoral head was the influencing factor [9].