In tribology, the flash temperature is the sharp temperature rise that takes place at the interface between two rubbing solids upon motion. Solid surfaces, irrespective of their method of formation, contain irregularities or deviations from a prescribed geometrical form. The high points on the surfaces are referred to as asperities; peaks, summits, or hills, and the low points are referred to as valleys. When two rough surfaces acted upon by a normal force come into contact, the opposite surface peaks to make contact first are those for which the sum of the heights is the greatest. Upon sliding the mating surfaces relative to each other, heat will be generated. The generation of heat causes those asperities in contact to act as heat sources. Heat generation at a given contact point is a very rapid process; therefore, heat sources act almost instantaneously. Due to the local reduction in the contact area, a constriction in the path of conducted heat takes place Constricting the path of conduction increases the density of thermal flux lines at the true contact spots (because solid-to-solid contacts represent the path of least resistance). This effect causes thermal spikes (temperature flashes) upon sliding, where asperities interlock. [1] According to the Archard law of adhesive wear, the wear volume is proportional to the normal force, the sliding distance, and inversely proportional to the hardness of the softer contact partners. This law does not contain any properties characterizing the “adhesion” of materials, e.g., the work of separation, either inside of the material or at the interface. The flash temperature is the temperature rise above the temperature of the solids entering the contact (bulk temperature). The contact temperature has therefore two components. In Fig-2 the tribological contact mechanisms are shown. There are many assumptions that were made by Archard which include that 100% of dissipated energy is transformed to heat. The thermal properties of the two contacting bodies are independent of the temperature. The frictional heat generated at the contact between the bodies is uniform and the heat produced at the contact is conducted into the contacting body. The single area of contact is regarded as a plane source of heat and the coefficient of friction is known and attains some steady value.

The temperature in Sliding conditions:

Research on the effect of temperature on tribological contacts is a very well-known topic that influences the tribological behaviors of the surface. The frictional properties at the contact interface between the two surfaces affect the temperature, the increase in friction increases the temperature, and less friction at the interface leads to a lower temperature. In a study by J. Bos on the frictional heating of tribological contact, the authors studied the numerical algorithm that described how to solve steady-state heat partitioning. Also, the study was associated with the flash temperatures for arbitrarily shaped contacts by matching the surface temperatures of the two contacting solids at all points inside the contact area. They have found results that are in the range of 5% accuracy. [3] In Fig-3 the multifunction tribometer from the R-tech instruments is shown. 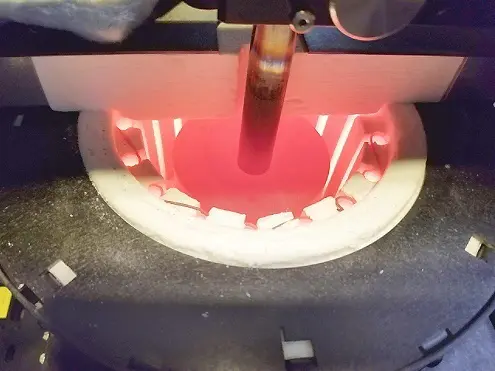