Fatigue wear is a type of wear in which the surface damage of the material takes place due to strain-induced on the surface for a particular number of cycles to a certain critical limit. The fatigue process is generated differently in different conditions, it depends on the type of materials or the type of contact, etc. In case of the metals, the fatigue wear is induced by the creation of surface and subsurface cracks which after a certain number of cycles lead to severe damage. Since this wear is determined by the mechanics of crack formation which is induced by high levels of strains causing the modification of the microstructure of the material’s surface affecting the wear processes [1]. The Fig-1 shows the schematic figure of fatigue wear.

Process of crack initiation and propagation:

The primary crack on further stresses induced due to the sliding contact at the interface matures into secondary cracks. These secondary cracks formed on the subsurface of the material propagates along the weaker plane towards the surface forming the wear particles on the surface. This step is schematically shown in Fig- 3.

The fatigue wear in the sliding contacts mainly occurs due to the unlubricated conditions and also due to the sliding motion at the interface of the material reciprocating. The crack initiation takes place at the weaker region on the surface and in this region, there is the orientation of the planes parallel to the sliding motion. The crack mitigates from the surface to the subsurface leading to laminar wear particles along the plane [3]. Lubrication plays an important role in the case of fatigue wear due to sliding contacts because the lubricant reduces the friction at the surface. The effect of lubrication causing the wear can be explained using the delamination model of wear. The reduction in friction due to the lubrication reduces the delamination which further reduces the wear [4]. The fatigue wear due to sliding contact is shown schematically in Fig-4.

At the rolling contacts, the materialistic properties of the surface of the material play an important role because of the concentration of the large stresses due to rolling. The stresses are repetitive in nature leading to severe damage on the surface. The fatigue wear depends on the conditions of rolling in different materials which can be explained as. In Fig-5 we can see the schematic representation of the fatigue wear mechanism in rolling contact for different materials.

For metals and non-oxide ceramics without lubrication:

In the case of the ceramics which form the string oxidising films, the wear formation can be controlled to a larger extent. The oxide films act as durable lubricating films reducing wear.

For metals with lubrication:

In lubricated conditions, the surface of the materials will have the protective film of the lubricant against wear. This film helps in avoiding the solid-solid contact, however, due to the large cyclic stresses on the surface, there is the formation of the weaker points on the surface which leads to crack generation causing the fretting wear.

In the case of the polymers when they are in rolling contact with any hard metals there is a concentration of the cyclic load generation on the surface. This leads to deformation of the polymer surface and there is only rapid wear during the geometric changes at the surface after a point the wear becomes milder due to the reduction of contact stresses. 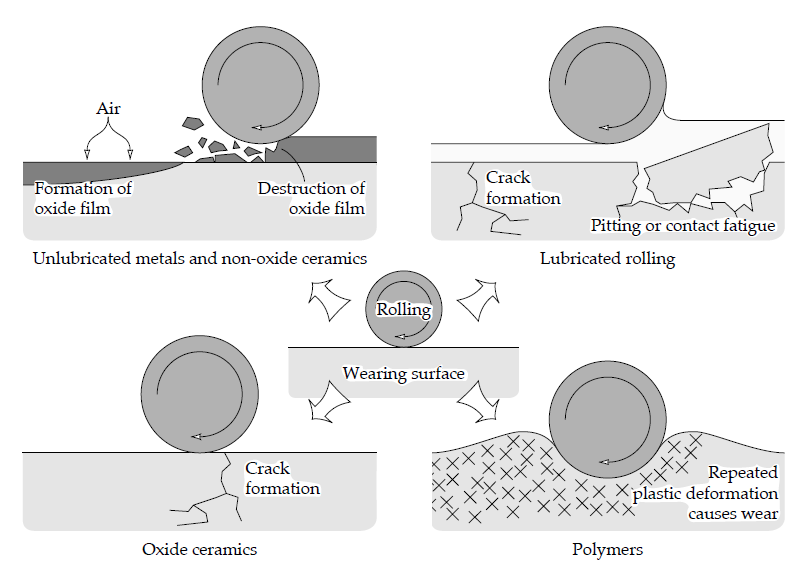 Similarly, during the wear, if there is wear debris formation, this wear debris gets entrapped in the lubricant film. This entrapped debris if comes in contact with the elevated asperities on the surfaces and gets trapped there generating the stresses causing the fatigue wear [6]. This mechanism is shown in Fig- 7.

The design aspects of any mechanical components play an important role in reducing wear, it is required to investigate the design aspects and modify the traditional designs to prevent wear and increase its life and efficiency. K Mao conducted similar work in his study on analyzing the gear tooth contact to reduce fatigue wear. He found the solution based on modifying the micro geometry of the gear tooth i.e. tip relief, face width crowning, etc to reduce the fatigue wear [7]. B. Zhang et.al. studied the simulation of the fatigue wear coupling mechanism of the aviation gear and found that the initial crack generation in the fatigue wear at the surface and the subsurface depends on the surface roughness of the material [8].