For the case of an incompressible fluid, the density is assumed to be constant. The continuity equation then simplifies to the following one:

Derivation of these equations can be found in lubrication textbooks, as for example in Szeri.

The Navier-Stokes equations are partial differential equations that describe the motion of the viscous fluids. These equations are derived by application of the 2nd Newton’s law and frequently are called equations of motion. Here we do not derive these equations (for derivation please see Szeri), but provide them in a following form:

Reynolds equation derivation starts with the simplification of the above Navier-Stokes equations. The major simplification comes from the geometrical consideration, namely, from the fact that the characteristic length in the direction across the film (see the figure above)

is usually much smaller compared to the dimensions along the film (e.g., radii of curvature of the contacting bodies or the linear size):

. As it will be shown later, this fact allows to eliminate several terms in the Navier-Stokes equations and significantly simplify the problem in hand. This equation was first obtained by Osborne Reynolds and that’s why this equation holds his name. See this article to know more about the Reynolds equation history and available solutions.

To start the simplification, one needs to make the equations dimensionless. Following Szeri, the following dimensionless variables are introduced:

By introducing characteristic velocity in directions along the film

, and across the film

, the fluid velocity components are made dimensionless as follows:

Pressure and time variables are made dimensionless as follows: 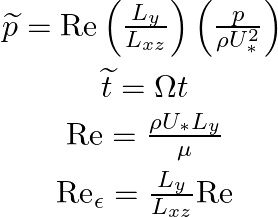 is a characteristic time scale,

In order for all the terms in this equation to be of the same order of magnitude O(1), the following should hold:

Substituting this into the continuity equation, we get:

Substituting the dimensionless variables into the Navier-Stokes equations brings us to the following set of equations:

Now these dimensionless equations can be simplified using the lubrication approximations, which are as follows:

Re-writing these equations in the dimensional form and adding the continuity equation, we get: 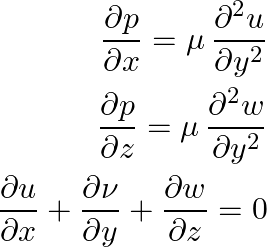 Now this system of equations is much simpler to solve than the initial system and yet sufficiently accurate to solve most of the problems encountered in lubrication field.

Due to the fact that the pressure does not change across the film, the first two equations of the system above can be integrated twice across the film. In order to obtain the integration constants, the following boundary conditions are used:

in x direction and they are not moving in z direction.

The integration leads to a following:

These expressions can be substituted to the continuity equation, however, the variable

is unknown. However, we can recognize that the average speed of lubricant across the film is:

And on the other hand, from the equation of continuity:

Finally, by substituting the expressions for

, and integrating, we get:

This is the classical Reynolds equation which describes the flow of a lubricant in a thin gap. This equation is the foundation of the classical theory of lubrication. By solving this equation with appropriate boundary conditions, one may obtain pressure distribution and, what is very important, the lubricant thickness

In electrohydrodynamic contacts, the pressure is typically sufficiently large to deform the surfaces elastically and the typical shape for the EHL film thickness is as follows:

As it can be seen from this figure, the film thickness is almost constant throughout the contact (that is the area between -a and a), the zone where the pressure is maximum and the contact is most severe. Thus, knowing the value of the central film thickness would be sufficient to describe the lubrication state of the contact. That is why, engineers came up with the analytical fits of numerically obtained solution of EHL equations. Further description of such fits and corresponding online calculators can be found here.