What is Reynolds equation?

Reynolds equation is a partial differential equation that describes the flow of a thin lubricant film between two surfaces. It is derived from the Navier-Stokes equations and is one of the fundamental equations of the classical lubrication theory.

In 1886, Professor Osborne Reynolds published his famous paper that gave birth to the theory of lubrication. He not only formulated the governing equation that describes the flow of a lubricant film, but also derived several analytical solutions and applied the theory to a series of reports on friction experiments by Beauchamp Tower. In his experiments Tower studied bearing friction. He found that the hydrodynamic pressure peaked sharply behind the center of the contact and that the efficiency of the lubricant depends on viscosity, speed and bearing dimensions. Anyone who is familiar with the lubrication theory nowadays knows that these are the most important parameters that have an impact on the lubrication performance. Back then it was not clear and Professor Reynolds was the first one to develop a theory to describe these relations. According to Reynolds, the lubricant was “dragged” into the contact, creating a film that carries the load imposed on the bodies. He combined his ideas into a mathematical formulation based on simplified Navier-Stokes equations.

Several assumptions were made during the derivation, but in recent years, some of them were relaxed and the generalized Reynolds equations in various forms were derived (see the section below).  Reynolds equation is the basis for the most practically important applications of hydrodynamic and elastohydrodynamic theories of lubrication.

Here we only outline the derivation of the Reynolds equation and the full derivation from Navier-Stokes equations can be found in the following article.

As it was already mentioned, the Reynolds equation is derived from Navier-Stokes equations. These equations describe the flow of a liquid in a rather detailed way. They are sufficiently  complicated to prohibit analytical solutions of most of the practical problems, including the lubrication problem. The major achievement of Professor Reynolds was the simplification of these equations to a form that is solvable analytically (which at the time was the only possible approach) and still describes the flow of a lubricant to a very good extent. In doing so, he used a dimensionless number (Reynolds number). German physicist Arnold Sommerfeld at the 4th International Congress of Mathematicians in Rome (1908) referred to that dimensionless number as ‘Reynolds number’. Ever since this name is used in the scientific world. [3] It should be noted though, that Reynolds equation is still complicated enough to be unsolvable analytically for many lubrication problems.

Navier-Stokes equations in general form include the effect of inertia and viscous properties of a lubricant. Reynolds number is given by the following equations:

is the Reynolds  number (dimensionless),

is the characteristic velocity

is the characteristic length ([m] in hydrodynamic theory of lubrication it is typically the central film thickness),

is the fluid viscosity

. This number was derived to describe the transition from laminar flow of a liquid to a turbulent flow, however, plays a central role also in derivation of the Reynolds equation of lubrication.

The principles of the theory are derived from the observation that the lubricant can be treated as isoviscous and laminar and the fluid film is of negligible curvature. The classical Reynold’s equation can be derived from the Navier-Stokes equations and the equation of continuity under assumptions of: When these assumptions are applied, we obtain following equations (following Szeri): 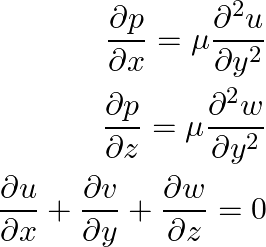 It is also assumed the lubricant is incompressible here. The third of these equations is the equation of continuity and will be used later in the derivation. The first two equations now can be integrated twice with respect to

, since partial derivatives of pressure

Boundary conditions should be applied:

represent the velocity of the bearing surfaces.
Evaluation of the integration constants leads to the following velocity distribution:

There are only three equations for four unknowns. This difficulty will be alleviated by integrating, in effect averaging, the equation of continuity across the film:

See the full derivation from Navier-Stokes equations in the following article.

In general, the Reynolds equation has to be solved using numerical methods such as finite difference, or finite element. Depending on the boundary conditions and the considered geometry, however, analytical solutions can be obtained under certain assumptions.

For the case of a sphere on flat geometry (for rigid bodies) and steady-state case, the 2-D Reynolds equation can be solved analytically assuming Sommerfeld (also called half-Sommerfeld) cavitation boundary condition. This solution was proposed by a Nobel Prize winner Professor Kapitza. The Sommerfeld boundary condition, however is not accurate and this solution has to be used as an approximate.

In case of 1-D Reynolds equation, there are several analytical, semi-analytical and approximate solutions available. In 1916 Martin obtained a closed form solution for a minimum film thickness and pressure for a cylinder and plane geometry under assumptions of rigid surfaces. Derivation of the solution and the corresponding MATLAB software can be found here. Martin employed Swift-Stieber cavitation boundary conditions. This solution is not accurate in case of high loads (high pressure in the lubricant), when the elastic deformation of the surfaces contributes to the film thickness. Divergence of experimental and theoretical results by Martin for high loads leaded researchers to conclusion that elastic distortion plays a significant role in lubrication. In 1949, Grubin obtained a solution for so called elasto-hydrodynamic lubrication (EHL) line contact problem with certain simplifications, where he combined both elastic deformation and lubricant hydrodynamic flow. Although his solution did not satisfy both elastic and hydrodynamic equations of EHL, his analysis was recognized as particularly useful. Corresponding MATLAB code can be found here. A lecture on solution of Reynolds equation using Finite Difference Method is given in the lecture below.

Various of generalized Reynolds equations were derived to weaken the assumptions used to derive the classical form. For example, compressible, non-Newtonian lubricant behavior can be considered. In tribology, Reynolds equation is used to predict the thickness of the lubricant film, but also to predict the friction developed by the lubricant on the surfaces. Since many tribological contacts operate in highly loaded regime and thin films, the shear rates can be very high (in the order of

). Many of the typical lubricants start to behave non-Newtonian in the contact conditions and therefore, Reynolds equation was generalized to the case of non-Newtonian lubricant.

Another generalization includes the slip boundary conditions. This form of the Reynolds equation is used to calculate film thicknesses and friction in textured surfaces or surfaces with high slip.