Surprisingly, when two lubricated solids are heavily loaded against one another and when a motion is applied to the solids surfaces, these two solids may not be touching one another (see Figure 1, left)! This interesting fact of nature was discovered in the early 20th century, when lubricated systems designed to last a few years happened to last much longer.

You may also have experienced something similar while driving fast on a flooded road (see Figure 1, centre) or while walking on a smooth and wet surface (see Figure 1, right). In both cases, you may have faced a scary slip. If this did not happen to you, no worries, it is better this way. You obviously did not experience floating but the presence of a liquid film that separated your vehicle or body from the ground, literally lifting up your mass and reducing dramatically the friction that usually allows you to control your vehicle or body. This film separation is the result of hydrodynamic pressure* and can occur between two rigid bodies; it is hydrodynamic lubrication (HL). However, the lubricated systems mentioned earlier (your car tyres and your foot/sole) have something in common: they deform under load and when this deformation has a similar order or magnitude to the film thickness, it is called elastohydrodynamic lubrication (EHL) and it also results in a film separation between bodies. This full separation even under load is often something looked after to design almost wear-less systems with reduced friction. 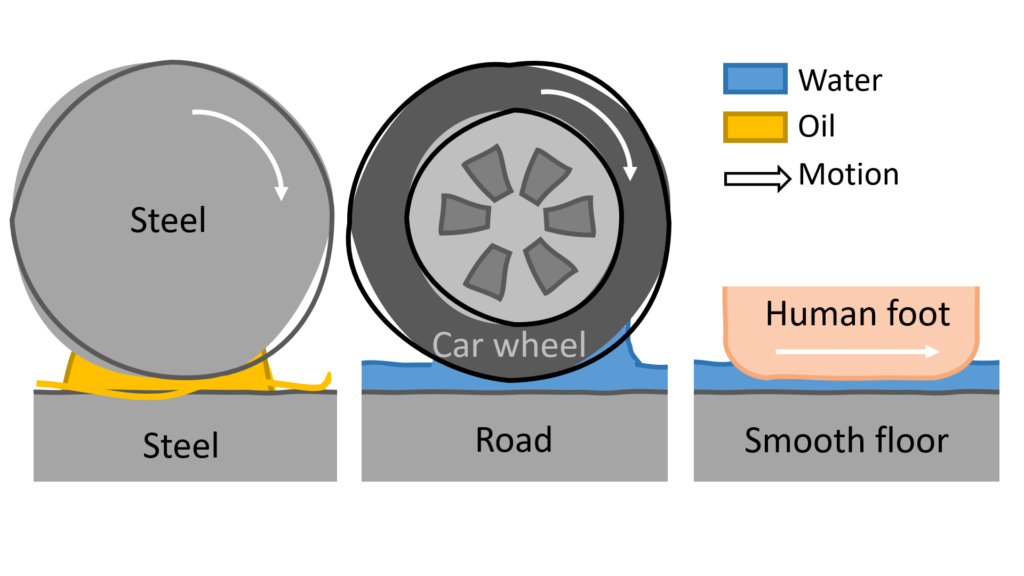 ) is larger than on the sides where the minima (

) can be found. Moreover, the minimum film thickness along the central line (

) is also smaller than (

), but in the present case it is larger than (

). In steel-steel contacts the gap is typically in the 10 nm – 1 µm range, which makes it at least about 50 times smaller than a human hair diameter! 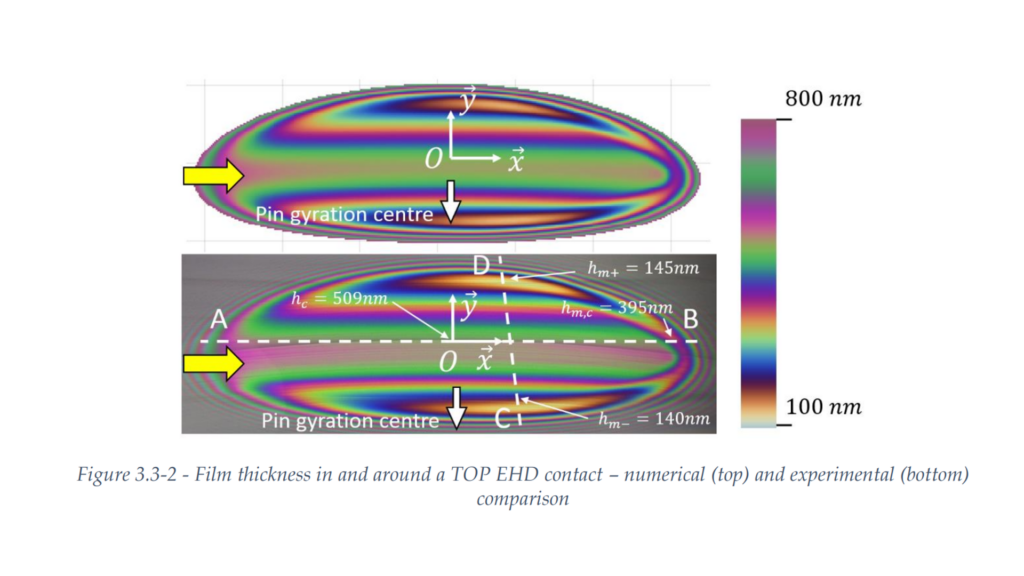 Another film thickness variation comes from the surface roughness. Roughness is often the result of the device machining and finishing operation. Even with the most advance processes, perfectly flat surfaces do not exist. When the average roughness has a similar amplitude with the gap within the contact, solid to solid contact may occur. This contact may lead to surface damage, wear and ultimately to an unwanted breakdown of the mechanism.

How to measure it?

Because of the damage risk it is very important to know the actual distance separating the solid surfaces. However, things become tricky when one wants to measure sub-micrometric distances that are literally hiding between high velocity heavily loaded strong components. In laboratories, it is possible to achieve such challenge, and a wide range of methods have been used as presented by Albahrani et al. 2. Some have measured the electrical resistance 3 of the contact or the capacitance 4 formed by the two steel surfaces separated by the oil film. The results were reliable but not sufficiently accurate and could not distinguish the minimum film thickness from the central film thickness. The other way to measure such distance is to use electromagnetic radiation-based methods. Apart from a few uses of X-Rays and infra-red technics, optical interferometry is the most widely spread method to measure the gap between two solids. After a first description in 1962 by Kirk 5, the experimental process has been improved over the years and it now allows a measurement precision of a few nanometres 6,7! This method is the one used in Figure 2. However, this accuracy is only possible in laboratory conditions and does not prevail in industrial contacts. Tracking the lubrication quality in an industrial machinery through a real-time film thickness measurement is unattainable.

Thankfully, the above-mentioned measurements have been wisely used in the last decades to assess the accuracy of physics-based film thickness calculations.

How to calculate it?

In the late 60s, Dowson and Higginson 8 were the first to publish a complete numerical solution of an EHD contact problem that was valid under some assumption (mainly an infinitely wide contact). In the mid-70s, this work has been extended to circular and elliptical contact (known as point contacts) by Hamrock and Dowson 9–11. Other works have since then stretched the limits of the cases solved and removed hypothesis on the solids shape, the thermal and/or rheology effects 12. But because the computations are still time consuming and require hardware resources, different studies proposed semi-analytical formulae based on dimensionless numbers. These formulae have physics-based equation shape, whereas the coefficients are obtained by minimizing the equation result when comparing them to the computation result. The oldest and most widely spread formulae for central and minimum film thickness are Hamrock and Dowson’s 9–11:

the reduced radius of curvature in the entrainment direction,

the reduced radius of curvature perpendicular to the entrainment direction,

the velocity in the direction of surface ,

the reduced modulus of elasticity,

respectively the Young modulus and the Poisson ratio of the solid

the reciprocal asymptotic iso-viscous pressure according to Blok [I] and

One can also mention the work of Evans & Snidle13, Moes&Venner who proposed a very handy pair of dimensionless numbers 14, Nijenbanning et al. 15 and Masjedi & Khonsari 16. However, it appears that the formulae proposed by Chittenden et al. 17 are versatile and interestingly accurate 18 despite its lower range of numerical cases:

For more precision, different formulae should be used depending on the use cases 19. This means that it is nowadays possible to establish relevant film thickness predictions at an early step of a device design provided that the engineer has the knowledge of the properties of the solids and lubricant. A little disclaimer is relevant at this stage: the formulae reported here are valid under isothermal, fully flooded contact inlet, Newtonian lubricant, isotropic elastic solid, smooth surfaces, and bulk lubricant assumptions. There are many assumptions here, and they are hardly ever respected altogether which is very frustrating. As a result, they should be used with care even if they remain very useful.

Now arises the question: what should you do with such a prediction of the film thickness? At which threshold can you consider that the wear will become negligible? For instance,

How to use it?

When one knows the minimum film thickness of a contact, it should be at least confronted to the roughness of the mating solids. Wear and lubrication can obviously not be summarized by a ratio, but the value of the dimensionless film parameter

is an indicator of the lubrication regime and according to Hamrock et al. 20 it reads:

the root mean square roughness of the solid

leads to low occurrence of solid to solid contact and to almost no wear. However, the targeted lubrication regime is often the elastohydrodynamic lubrication as it encounters a minimum wear but still a small film thickness. The latter shows that the oil has been well selected: viscous enough to provide a sufficient hydrodynamic lift, but not too viscous as it would increase friction forces.

Once again, there are many assumptions in the calculation of

. Among them, the surfaces are supposed to be smooth which is obviously not true in the partial and boundary lubrication regimes.

The warnings presented here should not discourage the reader even if the outcome can only be considered as a qualitative result. However, the method proposed in this blog is relevant, widely used and provides very useful predictions. As noted after comparing the different semi-analytical formulae 19 it is often mandatory to run dedicated numerical studies to obtain quantitative predictions.

* I think the role of water hydrodynamic pressure in human foot slipping is clearly questionable, at least at the beginning of the motion. This example is maintained for pedagogical purposes as it derives from daily life and includes film separation, relative motion, and body deformation.