What is lubricant viscosity?

Viscosity is the resistance of a fluid to flow. When a fluid is flowing, the molecules comprising it experience friction due to the molecular interaction among them. It means that different fluids with different viscosities flow at different speeds when the same force is applied. Another way to look at it is that the force required to induce movement of the fluid will be larger for more viscous fluids. Honey or corn syrup has a viscosity in the range of 2000-3000 cP (centipoise), while water only around 1 cP. Clearly water flows more easily, since it has much lower viscosity.

So why is this important?

Viscosity is key for any process involving fluid flow. It will determine, for example – How long a reservoir will take to fill. Viscosity will also determine how much energy is required to pump out process fluid. Viscosity can also help you determine the structure of molecules such as proteins in a solution or the force required to inject a new drug formulation into a patient.

The unit of viscosity is newton-second per square meter (

), which is usually expressed as pascal-second (

Dynamic vs Kinematic Viscosity: What is the difference?

. Kinematic viscosity has SI units of

Viscosity of water as a function of temperature can be obtained according to Vogel-Fulcher-Tammann equation:

is the dynamic viscosity in

is given in kelvins.

Here is a simple calculator that allows to calculate the viscosity of water as a function of temperature according to the equation above:

For lubricating oils, viscosity drops with temperature rapidly. There are a number of models exist to describe the relation between viscosity and temperature. These models are usually fits obtained using experimental data. The known equations are due to Reynolds, Vogel, but the most commonly used one is known as Walther equation. This equation is the standard used it ASTM, ISO and DIN charts.  Here is the Walther equation:

is the kinematic viscosity given in

is temperature in kelvins,

is a constant for a particular fluid. For lubrication oils, it can be chosen as 0.7 (see the reference). The constants

are calculated from the kinematic viscosities at 2 temperatures (

The lubricant manufacturers typically specify kinematic viscosities at 40C and 100C, which are then used in the equation above (but don’t forget to translate to kelvins). Here is a simple calculator for calculating the viscosity of an oil according to the Walther equation:

In lubricated contacts the contact pressure is typically in the range of 0.1-2 GPa. Viscosity of lubricants depends strongly on the pressure. Thus, for the calculation of the oil film thickness and lubricant friction in lubricated contacts, it is necessary to know the viscosity at the given pressure and temperature. There are several models available, here the most commonly used ones are presented.

This equation is a very simple one and therefore very common. It links the viscosity of the oil to the pressure as follows:

is the viscosity at ambient pressure,

is the pressure-viscosity coefficient. For lubricating oils,

This equation is known to be inaccurate for high pressure (>1 GPa), predicting a larger increase rate with increase of pressure than it really is.  Here is a simple calculator for calculating the viscosity of an oil at the given pressure:

A more accurate relation that also includes temperature dependence, is by Roelands:

in the Roelands equation as follows:

Here is a viscosity calculator based on Barus and Roelands equations:

A Zahn cup is a viscosity measurement device widely used in the paint industry. It is commonly a stainless steel cup with a tiny hole drilled in the centre of the bottom of the cup. There is also a long handle attached to the sides. There are five cup specifications, labelled Zahn cup #x, where x is the number from one through five (see table below). Large number cup sizes are used when viscosity is high, while low number cup sizes are used when viscosity is low. They are manufactured in accordance with ASTM D 4212, ASTM D1084 and ASTM D816 lubricants testing standards. Here is a quick demonstration of this test.

A falling-sphere viscometer is a device used to measure the viscosity of a fluid by measuring the time required for a spherical ball to fall a certain distance under gravity through a tube filled with the fluid whose viscosity is to be determined.

The vibrating viscometer determines viscosity by allowing a vibrating blade to vibrate in a liquid and measure the resultant viscous drag. The following formula determines the vibration amplitude when the measured fluid surrounds the vibrating shaft, and vibrational restriction occurs.

The measured amplitude varies according to the fluid’s viscosity. After K is calculated using a specimen fluid for which the viscosity and density are already known, µρ can be derived by comparing Ea with Ex. 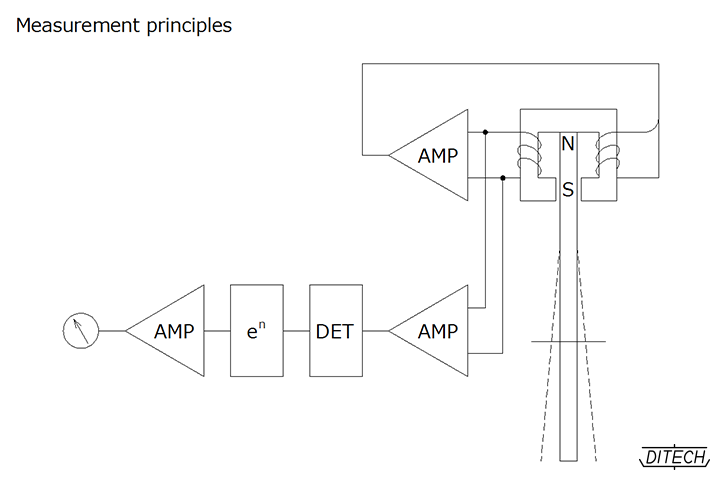 Rotational viscometers are designed to measure viscosity by analyzing the torque required to rotate a spindle submerged in a fluid at a constant speed. The continuous rotation of the spindle ensures calculations are made over time, allowing time-dependent fluid analysis. Digital models can evaluate low, medium, and high viscosity materials. Considerations for rotational viscometers should include the level of viscosity application, speed, and spindle configuration. Each consideration configuration will help hone the sensitivity and accuracy of measurement for your specific application. Additional considerations would be unit size and dimensions.