What is a Pin on Disk Test?

Friction and wear (typically wear rates and wear resistance) characterization of materials is typically performed using various types of tribometers, while pin on disk test being probably one of the most common. The popularity of the method is due to its relative simplicity and abundance of the tribological contacts that can be well described by the a simple pin on disk motion: from dry contacts of bolt screws [1] to rail wheels to rail contact [2] and to lubricated contact of biological implants. The test typically allows to test several motion modes, such as unidirectional, fretting modes and recently any other complex motion patterns. Typically, the tests are performed under the following testing standards: ASTM G99, ASTM G133 and ASTM F732. Further information on the tribology testing standards can be found here.

Schematically, the pin on disk test is depicted in the figure above. The stationary pin is pressed against rotating disk under the given load. The pin can be of any shape, however, the most popular shapes are spherical (ball or lens) or cylindrical due to ease of alignment of such pins (flat pins are typically subject to certain misalignment which can lead to non-uniform loading and difficulties for theoretical analysis). During the test, the friction force, wear and temperature are continuously monitored. A typical friction curve measurement recorded on a pin on disk apparatus is shown in the figure below: As can be seen form the figure, at the start of the test, the measured coefficient of friction (COF) is high and with further progress drops. This behavior is typical friction measurements and is attributed to a running-in phenomenon. During the running-in, the surface topography changes, chemical reactions takes place until the system comes to a steady-state state. This steady state COF is then usually reported.
The test can be performed in dry and lubricated conditions. In lubricated case, the pin is typically submerged in the lubricant bath, as shown in the figure below:

After a certain amount of cycles the test stops and typically further data processing steps include surface topography analysis to determine wear volume and surface roughness evolution, Scanning Electron Microscopy / Energy Dispersive X-Ray analysis for chemical composition/particles analysis, tribofilms, micro-structural analysis. If the test was performed in lubricated condition, the oil can be also analyzed for the wear particles size and additives deterioration.

An example of the pin on disk test in progress can be seen in the video below:

What could be simpler than setting up a rubbing experiment – it is just to rub two surfaces against each other. However, it appears that there are many factors that can influence the test results and the particular test design should approximate the actual tribological contact under investigation as close as possible. The following factors should be considered when designing pin on disk wear test procedure:

Further information can be found here.

In the modern tribometers, the wear scars can be analyzed using inline imaging systems, such as optical profilometers, Atomic Force Microscopes, etc. This analysis can also be performed several times during the test, thus giving the opportunity to measure the wear rate, wear volume and surface roughness evolution in time. This information can be used to develop accurate wear models and move towards predictive tribology.

An example of a worn ball surface topography measurement is shown below: 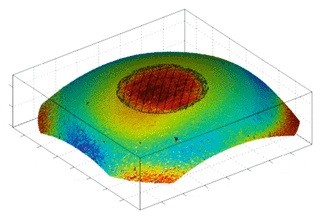 Currently, there is a trend to reduce the size of machine elements, increase power, reduce maintenance and improve reliability. These requirements push the design limits and require innovative solutions. Testing these solutions on a scale of a full machine would be too expensive, but also time consuming. Therefore the universal experimental set-ups are often used to perform tribological research on a prototyping phase, prior to full scale tests.

Pin on disk, pin on ring, pin on flat, ball on flat tests are all similar to each other with the differences in the geometry of a specific tribometer and the pin.

In research of materials, coatings and lubricants standardized tests are used to improve the reproducibility and for simplicity. The data collected using standard tests can also be used to compare the results obtained by various laboratories. The standards in tribology were developed by ASTM, DIN as shown below.

A full list of tribology related testing standards can be found here.