Interest in special coatings and thin films for tribological applications increased rapidly in the last few decades, especially driven by the automotive industry [1,2]. Specific properties of coatings which are interesting for many engineering applications are:

In general, tailoring the surface properties and microstructure of films is very important for any application. Adequate adhesion between coating and substrate is very crucial for tribological longevity. A multitude of process parameters affect the hardness, thickness, residual stresses, roughness, adhesion, elasticity, etc., which in parallel shall not alter the tribological performances of coatings and layers. Thin film coatings for friction reduction make only sense, when they display wear rates below <<10-7 mm³/Nm under lubricated conditions, also because they are thin, and will not delaminate or fragment over time. Due to the high hardness of most coatings and thin films, a smooth surface topography is essential for low wear of the tribosystems and the counter body. Plateau-like profiles have favorable tribological advantages. The major reasons are:

Today, hard thin films and coatings are characterized by scratching with a spherical tipped diamond stylus. During this test, either a constant or increasing force is applied to the pin sliding perpendicular to the surface to be tested to promote adhesion and/or cohesion failure of the layer/substrate interphase. Scratch testing indicates also as a simple and rapid method the level of toughness. The onset load for coating cracking is a measure of the cohesion strength of the coating.

By choosing the pieces/specimens with a metallurgy corresponding to real contact geometries of application regarded under controlled tests conditions by SRV® (e.g. controlled humidity, bulk tempe­ra­ture, dynamic load, frequency and stroke, etc.) model tests can be executed with a high degree of transferability to practical applications [3]. Keys are here the tribometric operating conditions, which shall match those of the application [4]. Additional available measurement sensors, like electrical contact resistance, acoustic emission or total linear wear unveil further insights into the origins of the observed wear mechanisms. SRV® is seen globally as a precise tool for benchmarking the tribological profile of different layers and thin films, e.g. diamond-like carbon (DLC).

Delamination characteristics of diamond-like carbon (DLC) thin films can be investigated by a recipro­ca­ting load step test. The load step increment is 10 N every minute. In such a test, the load carrying capacity leading to a malfunction of DLC films due to delamination and/or wear can be assessed. The test geometry, test conditions, materials and tribological test conditions are shown in Figure 2. Flat disks in X5CrNiCuNb16-4 (AISI 630) were coated with different DLC films (a-C:H, a-C and ta-C) with thicknesses of 0.1, 0.8 and 1.0 mm. The chosen ball materials were X110Cr16 (AISI 440C) or Al2O3. Alumina has the advantage of the absence of tribo-oxidation under such test conditions.

This load step tests indicates the load carrying capacity, the evolution of coefficient of friction as function of load and wear. The test is terminated, when the highest load was reached, delamination at a given load occurred or excessive wear is indicated by fluctuations in the signals of coefficient of friction and oscillation stroke. The adhesion of films was estimated by observation of worn surface and two wear mechanism are discussed by Mano et al. [5], which can be summarized as follows:

Example 2: Evaluation of friction and wear of carbon-based thin films

The tribological properties of most coatings and thin films are sensitive to relative humidity [6] and increasing temperature. In internal combustion engines, the surface temperatures of cams reach 170°C and of piston ring up to 300°C. In consequence, the interaction of lubricants and their additives with thin films as function of temperature in relation to friction, wear and fatigue is of importance.

Frictional and wear behaviors of alumina and silicon nitride balls oscillating against an industrial a-C:H thin film deposited Cronidur30 disk (see Fig. 3) and lubed by a high-temperature ester oil were investigated at temperatures up to 250°C [7]. Independent from the ball material, the wear of the a-C:H film increases with increasing oil temperature, whereas the total wear of the tribosystems depend also from the type of ceramic used. 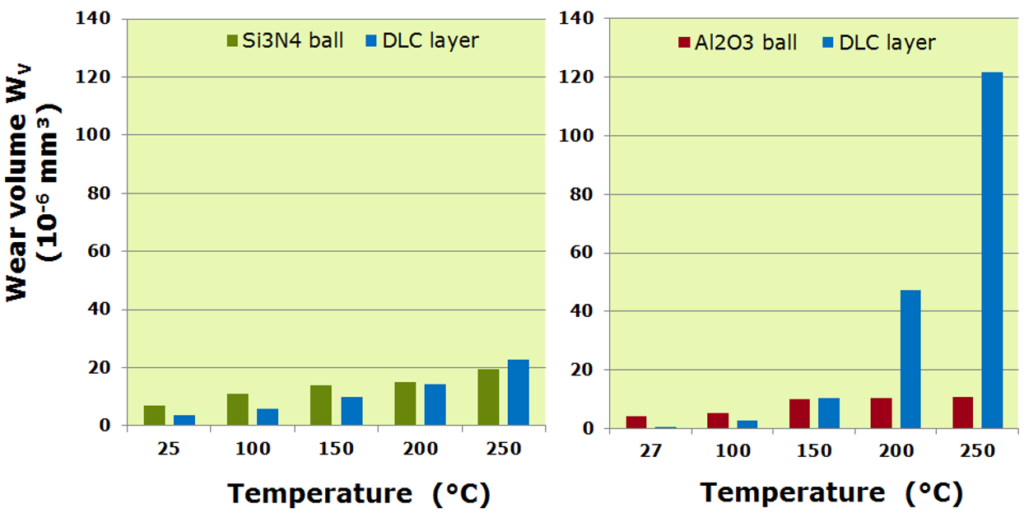 Molybdenum dithiocarbamate is a very effective friction modifier. The functional interaction between ta-C and a-C:H thin films deposited on 100Cr6 (AISI 52100; SUJ2) disks oscillating against roller in 100Cr6 in API Group III base oil additivated with MoDTC is represented in Figure 3. The SRV® tests confirmed the friction reducing effect of MoDTC but illuminate increased wear of a-C:H thin film by MoDTC [8]. 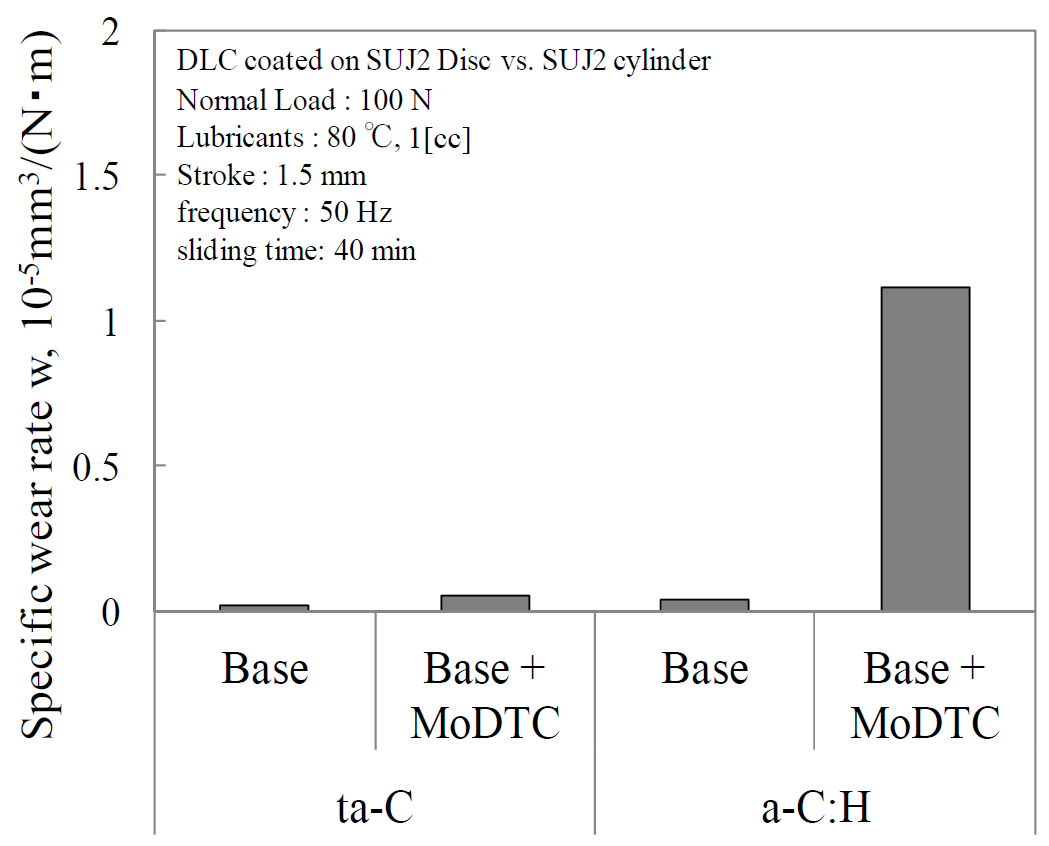 Figure 3: Evolution of coefficients of friction (left) at 80°C and specific wear rates (right) of ta-C and a-C:H thin films [[8]]

The target of this study [9] was to understand the tribological response of NCD-films in the presence of high-quality lubrication and exploring the possibility of using them in future automotive system.

The main results of this study can be summarized as follow:

5 different carbon-based coatings of different types were deposited on standard SRV® disk (100Cr6) by 3 suppliers. The important data of selected disks for this study are summarized in Table 1.

The chosen operating conditions based on the results of pretests and experiences from literature and recommendations from the suppliers are as follows:

Ball bearing steel 100Cr6 (AISI 52100) and alumina (Al2O3) were chosen for upper specimen (ball with 6 mm diameter) materials. It is well known that the environmental conditions have a significant effect of the tribological results. Two different relative humidity (r.h.) values were adjusted and controlled by the climate tool connected to the SRV®5 test chamber. Environ­men­tal test conditions were as follows:

Figure 5 shows exemplary the comparison of evolution of coefficients of friction (CoF) values with test time. The effect of the ball material can be observed clearly. Alumina is at RT insensitive to tribo-oxidation, whereas 100Cr6 forms by tribo-oxidation iron oxides, which hydrolysis with humidity to -, – und -FeOOH and Fe(OH)2.

SRV® Software offers different automatically evaluation of the results. Evaluation of average value of CoF for chosen periods is easily possible. The coefficients of friction can be displayed at any desired test time, e.g. here in Figure 6 at 5 and 25 minute.

The comparison of evaluated CoF for all conditions are shown in Figure 7. The effect of ball material and the level of humidity can be observed clearly. With ceramic ball, the CoF values are significantly lower except for coating #2. 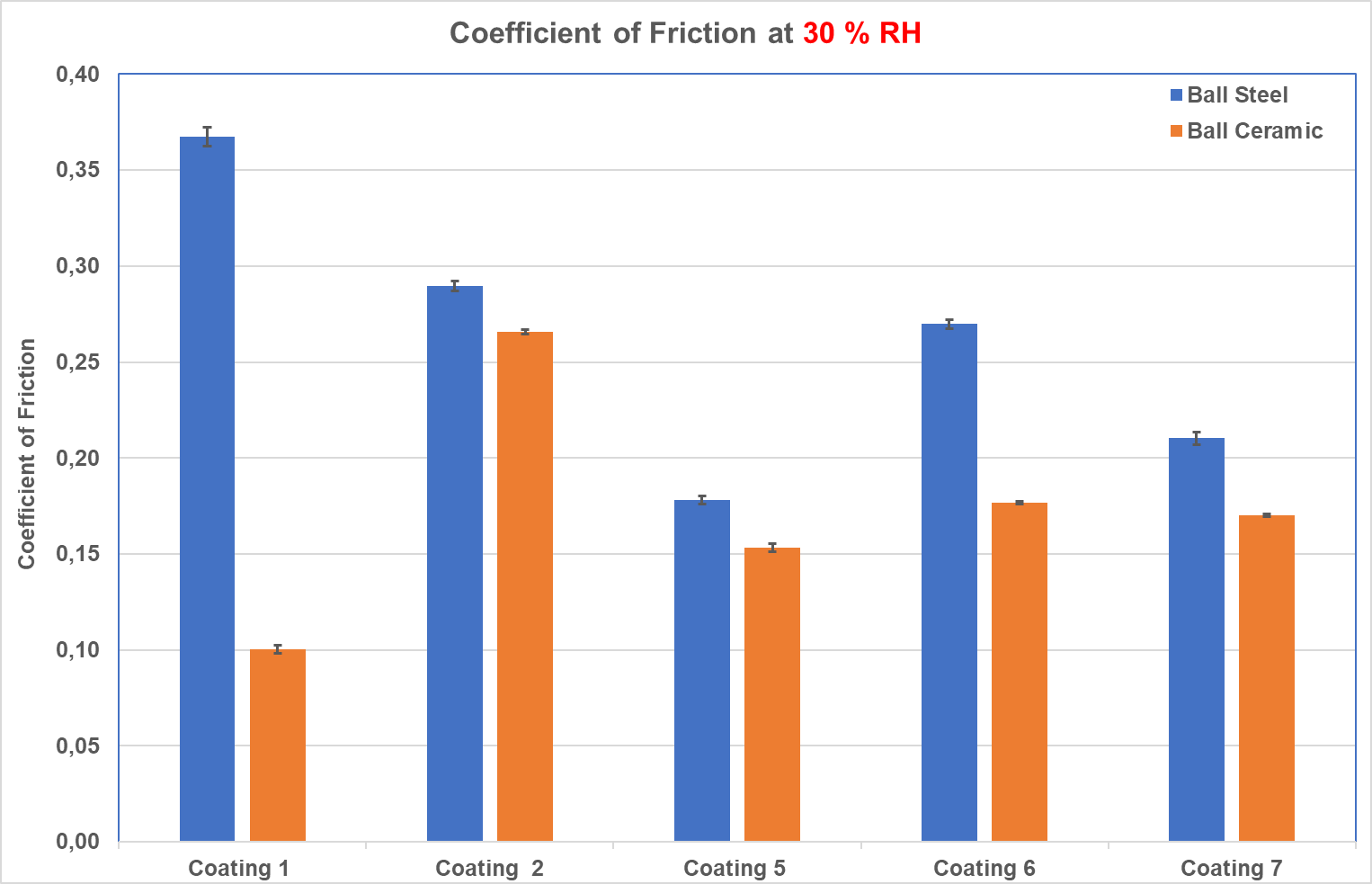 Remark: Two additional sensors for SRV®5 machines deliver further valuable information on the wear mechanisms of coatings and their origins:

This newly developed tabletop tribometer enables coating producers to benchmark the tribological performances of their product in a very simple manner. With sinusoidal movement under normal load up to maximum 300 N equipped with an innovative online wear sensor, this machine can help coating producer to develop their quality and even their production process. One DLC coating is measured under following parameters:

Figure 8 displays a good repeatability for the online recorded evolution of coefficients of friction and linear, total wear of both tribo-elements.

2disk represents a new screening method to differentiate the frictional response, wear behavior and slip-rolling resistance in one test under of slip-rolling, high Hertzian contact pressures and different lubrication regimes [10]:

This functional profile is complementary to bench tests and 2disk shortens the screening of oils, additives, materials and coatings and the development time of products.

Figure 8 shows the results of investigation on different thin film coatings under slip-rolling with 10% of slip and very high Hertzian contact pressures (P0max 1.5-1.95 GPa). Some coating materials with low coefficients of friction failed at higher cycle numbers. The DLC thin film (red) retained its low friction until 10 million of cycles and can be considered as slip-rolling resistant.